Resources such as layers, maps, portal items, tasks, and others, commonly rely on remote services or datasets on disk to initialize their state. The nature of accessing such data requires the resources to initialize their state asynchronously. The loadable design pattern unifies the behavior that different resources use to load metadata asynchronously, and resources that adopt this pattern are referred to as "loadable." The pattern also provides a mechanism to retry if previous attempts to load failed so that you can properly handle and recover from exceptional circumstances such as network outages or service interruption. Loadable resources appropriately handle concurrent and repeated requests to load in order to accommodate the common practice of sharing the same resource instance among various parts of an application, and also permit cancellation so that you can cancel loading a resource, for example, if the service is slow to respond. Finally, loadable resources provide information about their initialization status through explicit states that can be inspected and monitored.

The getLoadStatus is the state of the loadable resource. Four states are possible: 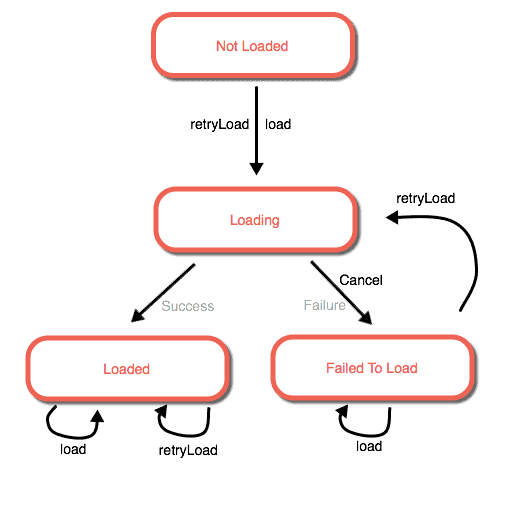 A resource starts loading its metadata asynchronously when loadAsync is invoked. At that time, the load status changes from NOT_LOADED to LOADING. When the asynchronous operation completes, the callback is invoked. If the operation encounters an error, the error argument in the callback is populated, and load status is set to FAILED_TO_LOAD. If the operation completes successfully, the error argument is null and the load status is set to LOADED, which means the resource has finished loading its metadata and is now properly initialized.

Many times, the same resource instance is shared by different parts of the application. For example, a legend component and a table of contents component may have access to the same layer, and they both may want to access the layer's properties to populate their UI. Or the same portal instance may be shared across the application to display the user's items and groups in different parts of the application. In order to accommodate this type of application development pattern and make things simple for you, loadAsync supports multiple "listeners". It can be called concurrently and repeatedly, but only one attempt is ever made to load the metadata. If a load operation is already in progress (LOADING state) when loadAsync is called, it simply piggy-backs on the outstanding operation and the callback is enqueued to be invoked when that operation completes. If the operation has already completed (LOADED or FAILED_TO_LOAD state) when loadAsync is called, the callback is immediately invoked with the past result of the operation, be it success or failure, and the state remains unchanged. This makes it safe for you to liberally invoke loadAsync on a loadable resource, without having to check if the resource is already loaded or not, and without worrying that it will make unnecessary network requests every time.

If a resource has failed to load, calling loadAsync on it subsequently will not change its state. The callback will be invoked immediately with the past load error. In order to retry loading the resource, you must use retryLoadAsync instead. The advantage of this approach is that if, hypothetically, loadAsync were to retry loading a failed resource, an app could easily end up making many asynchronous requests to load the same resource just because it shared the same resource instance in different parts of the application and each part tried to load the resource without first checking if it was already loading. This pattern allows loadAsync to be invoked indiscriminately without worrying that it might add overhead, and makes retrying a separate and explicit scenario using retryLoadAsync.

A resource retries to load its metadata when retryLoadAsync is invoked, but only if it previously failed to load (FAILED_TO_LOAD state) or wasn't loaded to begin with (NOT_LOADED state). The resource transitions to the LOADING state and makes a new attempt to fetch its metadata. The callback is invoked when the asynchronous operation completes.

If the resource has already fetched its metadata and has initialized its state (LOADED state), retry doesn't do anything. Instead, retry immediately calls the callback with the past result and the state of the object remains unchanged. The object's metadata isn't fetched again.

If an asynchronous operation is already in progress (LOADING state) when retryLoadAsync is called, it simply piggy-backs on the outstanding operation and the callback is enqueued to be invoked when that operation completes.

A resource cancels any outstanding asynchronous operation to load its metadata when cancelLoad is invoked and it transitions from LOADING to FAILED_TO_LOAD state. The getLoadError information that reflects that operation was cancelled.

The cancelLoad method does nothing if the resource is not in LOADING state.