A zoom level or scale is a number that defines how large or small the contents of a map appear in a map view.

A brief history of zoom levels

Zoom levels were made popular by various web mapping solutions and APIs in the early 2000s. These adopted a tiling scheme that defined how a global map in Web Mercator projection could be pre-rendered for display in a web browser. 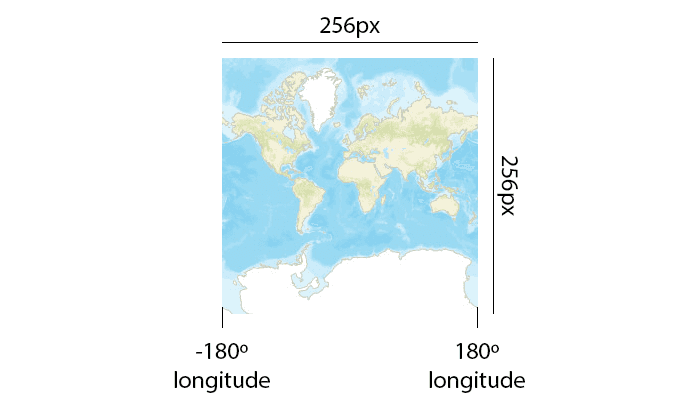 Zooming in by one level halves the scale (and consequently quadruples the number of 256x256 pixel tiles required to cover the world - 2x the horizontal tiles, and 2x the vertical tiles). Zoom level 1 requires 4 tiles to cover the same geographic area as the single zoom level 0 tile; zoom level 2 requires 16 tiles; zoom level 3 requires 64, and so on. By the time you get to zoom level 20, 1,099,511,627,776 tiles are needed.

Crucially, these zoom levels represented scales at which the pre-rendered 96 ppi 256x256 pixel map tiles could be displayed crisply, without pixel resampling, in a web browser. Web browsers used the standard CSS pixel size of 96 ppi: that is, 1 tile pixel would match 1 screen (browser) pixel.

Over time, this mapping between zoom levels and map scales became established as a de facto standard, despite tiles being used outside of browser apps at many different screen resolutions, and despite the onset of dynamically rendered vector tiles in place of the original pre-rendered 96 ppi PNG or JPEG image tiles.

Many modern mapping solutions and APIs only display Web Mercator maps and so continue to use zoom level as a shortcut for map scale. They do this despite using vector tiles and vector data, which means they don't need to lock to these specific legacy zoom levels for a crisp map display that avoids pixel resampling, although many do.

ArcGIS APIs can render many different map projections at a full range of scales, and so use scale rather than zoom level (although the ArcGIS JavaScript API does provide support for zoom levels as a convenience).

Use this interactive tool to translate zoom levels to map scales:

This table covers each distinct zoom level and the map scale it translates to. Usage suggestions depend on the dimensions of the map view in question but are reasonable guides for a map in a typical web page.