Routing is now made simpler with the help of the Directions widget. This widget calculates directions between two or more locations and makes it easy to add turn-by-turn directions to a page as well as a route to a map. The widget takes care of encapsulating routing functionality into an easy-to-use widget with an already defined default user interface. The widget defaults to the ArcGIS Online route service but can be configured to use any ArcGIS Server Network Analyst routing service. To explore further, see the Directions sample. 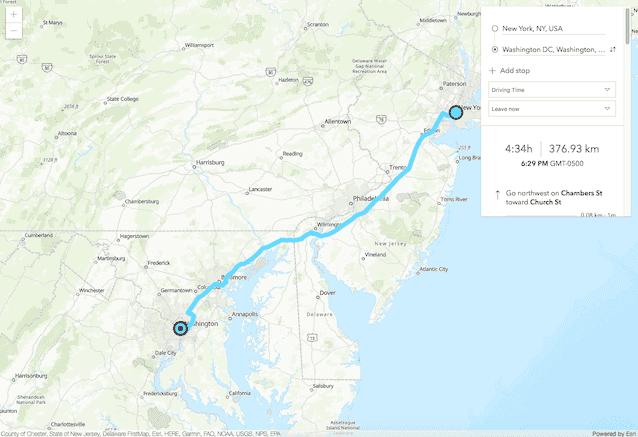 Currently, the widget is still in its beta version. It does not yet have full parity to the functionality provided in the 3.x Directions widget. Additional functionality is scheduled in a future release.

Measuring the vertical, horizontal, and direct distance between two points is now possible with the DirectLineMeasurement3D widget. When the widget is active, a horizontal "laser" line is drawn which indicates the height at the current mouse position. This line can help in analyzing the heights of objects relative to each other and the terrain. 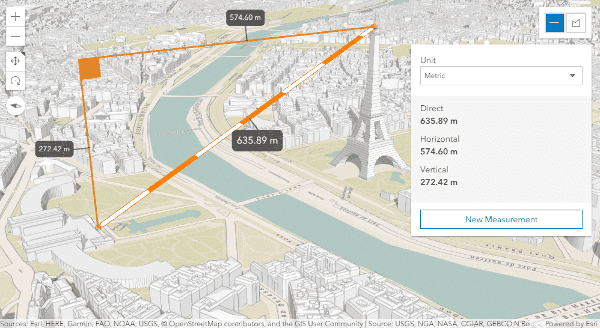 The Direct line measurement in 3D sample shows how to use this widget.

Fullscreen widget can be used to present the View or a user-defined HTMLElement using the entire screen. To see this widget in action, please refer to the Animate opacity visual variable and Animate color visual variable samples.

Numerous classes in the API resolve to promises. This is the case for WebMap and WebScene, MapView and SceneView, Basemap, Ground, layers and layerviews.

Prior to 4.6, you needed to call the then() method on classes to ensure a view or layer was ready prior to executing specific code.

At 4.6, then() is deprecated in favor of when(). The then() method will still be honored at 4.6, but will throw warning messages in the browser developer console, to ease the process of updating apps to using when(). We made this change to allow the use of native ES6 promises within the context of the ArcGIS Maps SDK for JavaScript.

Read more about this change on the dedicated blog post.

In a future 4.x version, in 2018, then() will be removed from all applicable classes, making this a breaking change.

Prior to 4.6, then() was used with resolved promises.

While when() should be used at 4.6 on all applicable classes, you must specify the following has flag prior to loading the ArcGIS Maps SDK for JavaScript for your app to be compatible with native promises. This flag will also prevent the warning messages from appearing in the console if still using then():

Additionally this change will allow you to take advantage of async/await alongside the ArcGIS Maps SDK for JavaScript to write asynchronous code that looks synchronous:

Most layers now can be refreshed in 2D MapViews by setting refreshInterval property or by calling refresh() method on it.

At 4.6, the following capabilities are now available as a part of the Smart Mapping modules: 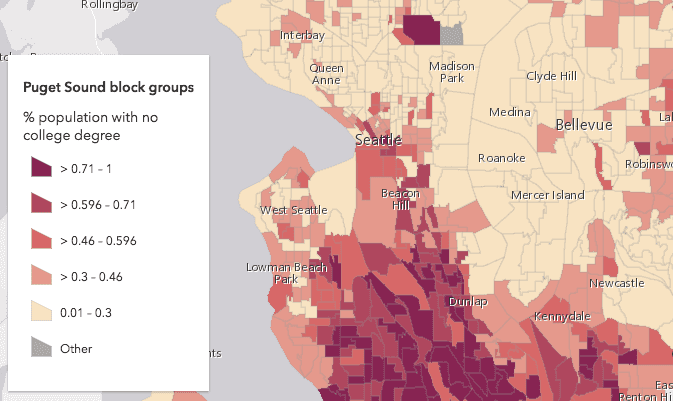 FeatureLayers are now rendered with WebGL by default as of version 4.9.

We're continuing to improve the user experience for the 2D WebGL-rendered version of FeatureLayer, which is still in beta. In 4.6, some of the processing in the layer has moved to workers using the API's workers framework. We'll continue improving the performance of FeatureLayer with the intention of making WebGL the default method of rendering features in a future release.

Scene layer performance has significantly improved in this release. Buildings and integrated mesh scene layers now load up to 50% faster and follow the correct front-to-back displaying order. To help you get started with scene layers, there is a new guide topic on Working with scene layers.

The TypeScript declaration file for the ArcGIS Maps SDK for JavaScript describes the shape of the API to TypeScript. Learn more about how to install this file from the dedicated guide page or on GitHub.

Read more about those improvements on the dedicated blog post