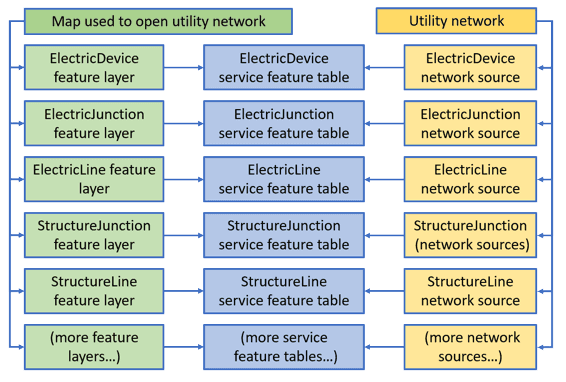 Trace parameters specify how the trace analysis proceeds across the utility network. Essential trace parameters, described in this section, include:

Use the utility trace type to create the parameters. Create a set of UtilityTraceParameters by providing a UtilityTraceType of Upstream along with a collection of starting locations (if known at this stage).

You can create your own trace configuration.

If the trace fails, you can examine why. For example, failure could be due to dirty areas in the network topology.

Advanced trace configuration settings include those for traversability and barriers.

All upstream and downstream traces can operate across the current tier (source tier). If you want your upstream or downstream trace to continue into another tier, you set the TargetTier property on the UtilityTraceConfiguration.

The following example creates a new graphics overlay to display all associations within the map extent using a unique symbol for each UtilityAssociationType.