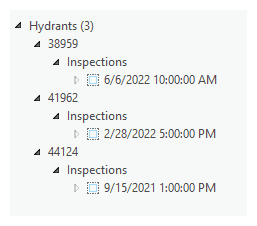 Relating features is akin to changing the attributes of feature; it's synchronous and done in memory. A feature once related must be added or updated to the table using FeatureTable::addFeatureCompleted or FeatureTable::updateFeature for changes to be committed.

The sample feature service at http://sampleserver6.arcgisonline.com/arcgis/rest/services/ServiceRequest/FeatureServer contains a layer of point features that represent customer requests for service. A related table contains zero or more comments for each feature in the service request layer.

You may want to unrelate two already related features. For example, when a feature has a constraint violation, such as an invalid cardinality, you may want to undo the last relate operation that caused the violation. Unrelating features resets the KeyField of the destination feature. Like the relate method, unrelate is also synchronous and is done in memory. Therefore or must be called for changes to be committed to the table.

Considering the hydrants and inspection example above with a relationship cardinality of 1:1, if an inspection were to be related to a second hydrant, it would be a cardinality violation.