Part 1 - What is geocoding?

What is the concept of geocoding?¶

Geocoding with ArcGIS, in short, is to convert your addresses and place names into co-ordinates and put them on a map. 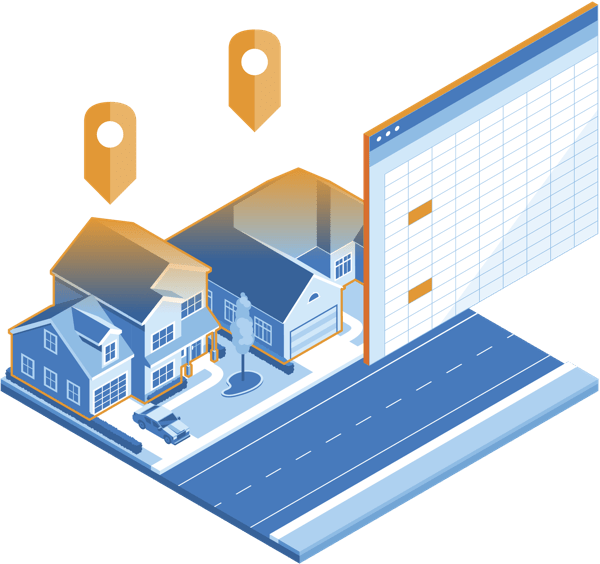 A full explanation of the concept is also given as:

"Geocoding is the process of transforming a description of a location — such as a pair of coordinates, an address, or a name of a place — to a location on the earth's surface. You can geocode by entering one location description at a time or by providing many of them at once in a table. The resulting locations are output as geographic features with attributes, which can be used for mapping or spatial analysis. You can quickly find various kinds of locations through geocoding. The types of locations that you can search for include points of interest or names from a gazetteer, like mountains, bridges, and stores; coordinates based on latitude and longitude or other reference systems, such as the Military Grid Reference System (MGRS) or the U.S. National Grid system; and addresses, which can come in a variety of styles and formats, including street intersections, house numbers with street names, and postal codes at the help document."

The most popular use cases of geocoding include:

For simple addresses, such as a street address, street name, or street intersection, you can perform the search using the geocode() method. For best results, you should include as much location information as possible in the search in addition to the street address.

You can pass the address components as a single address string or separated into multiple parameters using a dict object. Examples of each are shown below. Note that in each case the response is the same for both the single and multiple parameter addresses.

To start with, import geocoding and gis modules, and initialize a GIS connection to ArcGIS Online organization, or to ArcGIS Enterprise.

Note here, you can either create the GIS with username and password or with the api_key parameter, e.g. gis = GIS(api_key=<your api key>).

An `Application programming interface key` (`API key`) is a permanent access token that defines the scope and permission for granting your public-facing application access to specific, ready-to-use services and private content. If you already have an ArcGIS account, you can sign in to view your default API key or to create a new API key. An API key is created for you when you sign up for an ArcGIS Developer account. For more, check out the API Keys Doc.

Besides the geocode() function we have seen above, another way to perform geocoding is to use the locator service within the ArcGIS GeoAnalytics Server for big datasets. The syntax for using the geocode_locations() function of the geoanalytics module is shown below:

What are geocoders and their types?¶

Geocoders are tools that can find spatial coordinates of addresses, business names, places of interest and so on. The output points can be visualized on a map, inserted as stops for a route, or loaded as input for spatial analysis. They also used to generate batch results for a set of addresses, as well as for reverse geocoding, i.e. determining the address at a particular x/y location.

Geocoders have numerous properties accessed through geocoder.properties. These properties specify the types of information the geocode() function accepts as input and the structure of the outputs when performing geocoding operations using a particular geocoder. A geocoder's properties also define any limits or requirements established by the underlying locator.

The `ArcGIS World Geocoding Service` allows you to find addresses or places in the world, geocode a table of addresses, or reverse geocode a location without the need to purchase the reference dataset for creating the locators. The service references rich and high-quality point and street address data, places, and gazetteers that cover much of the world. The World Geocoding Service is widely available. All you need to access it is a connection to an ArcGIS Online organization or Enterprise and the proper credentials, which may make it unnecessary for you to set up the service on your own instance of ArcGIS Server or enterprise. The service is intended to simplify the workflows of developers and GIS professionals.

A GIS includes one or more geocoders. The list of geocoders registered with the GIS can be queried using get_geocoders(). This method returns a list of Geocoder instances. In the example below, there is one registered Geocoder with the GIS, that uses the Esri World Geocoding Service for geocoding:

The first available geocoder in the active GIS is used by default, unless specified, and all geocoding functions have an optional parameter for specifying the geocoder to be used.

The newest GIS object being created will have its first available geocoder as the default geocoder unless set_active=False is passed in the GIS constructor. However, you can also use a different Geocoder by specifying it explicitly as a method parameter.

Properties of the geocoder class¶

The geocoder may also support a single line address field. Single field input is easier because the address parsing is done for you; however, multi-field input may provide faster responses and more precise results. The field name can be found using the code below:

When using single line input for the address, it is unnecessary (though supported) to create a dict with this key and the single line address as it's value. The address can be passed in directly as a text string.

The categories property can be used to limit result to one or more categories. For example, "Populated Place" or "Scandinavian Food". It is only applicable to the World Geocoding Service. The following code lists the entire hierarchy of supported category values.

Next, let's look at two ways to create a custom geocoder:

Geocoding services can be published as items in the GIS. An instance of the geocoder can also be constructed by passing in a reference to these items from the GIS to the Geocoder's constructor:

World Geocoding
The World Geocoding Service finds addresses and places in all supported countries around the world in a single geocoding service.

Creating a geocoder from a geocoding service¶

Geocoders may also be created using the constructor by passing in their location, such as a url to a Geocoding Service. If the geocoding service is a secure service, pass in the GIS to which it is federated with as the gis parameter:

Next, let's look at an example below that shows calling the geocode() function to geocode an address. It specifies that the esrinl_geocoder created above should be used for geocoding by passing it in explicitly.

What is needed to geocode?¶

Summarizing the requirements for performing geocode that have been mentioned above, you need to meet either one of the two criteria:

Generally the capabilities of geocoding include:

For countries covered by a geocoding service, e.g. the ArcGIS World Geocoding Service, the address coverage, the supported language, and relative geocoding quality would vary. The geocode_coverage WebMap object displayed below illustrates the various levels.

The overall geocoding quality is a function of the degree of street-level address coverage in a country, knowledge of a country's address styles, and geocoding performance for addresses in that country. The quality levels are subject to change. Typically, the quality of geocoding for a given country improves over time and may be upgraded to a better level, but there may be instances where countries are downgraded to a lower level based on user feedback.

When multiple languages are listed in the Supported Languages column for a country, it does not necessarily mean that all addresses in the country are available in each language. In some cases, a language may only be supported within a particular region of a country or for a small subset of addresses. Generally, in the Level 1 and Level 2 tables, the first language listed is the primary language.

The information in the following tables only applies to street addresses and not to POIs (geocode candidates with Addr_type = POI).

ArcGIS Online Geocoding Service Coverage
A map showing the countries supported by the ArcGIS Online geocoding service and the quality of geocoding in each country.

The darkest-shaded countries in the map are Level 1. They provide the highest quality geocoding experience. Address searches are likely to result in accurate matches to PointAddress and StreetAddress levels.

The medium-shaded countries in the map are Level 2. They provide a good geocoding experience. Address searches often result in PointAddress and StreetAddress level matches, but sometimes match to StreetName and Admin levels.

The lightest-shaded countries in the map are Level 3. They provide a fair geocoding experience. Address searches will more likely match to StreetName or Admin levels.

The unshaded countries in the map are Level 4. They only provide Admin-level matches.

Usage of ArcGIS World Geocoding Service operations can be paid-only (e.g., when performing geocode()), or can be free (e.g., while using suggest()). Other operations can be either free or paid, depending on whether you are using them for search capabilities only, such as temporarily displaying the results, or storing the results for later use (when using for_storage=True). Please see the table below for more information, or check up the REST API help doc.

To be more specific about paid services, for instance, for geocoding a table of addresses, rematching a geocoded feature class, and reverse geocoding a feature class, the service operates under a credit-based usage model that allows you to pay only for what you use. If you don't already have a subscription to an ArcGIS Online for organizations, you can purchase one or request a free trial. For more information on the credit-based usage, see service credits for geocoding.

Layout of the arcgis.geocoding module¶

The class functions and the Geocoder class as defined in the geometry module can be seen in the Object Model Diagram drawn below: