Topologies are collections of one or more feature classes in a geodatabase feature dataset, with rules governing how point, line, and polygon features share coincident geometry. Many geographic features share a common boundary; for example, ZIP Codes might follow street centerlines, shorelines share a border with oceans, and land parcels share an edge with neighboring lots.

Topologies provide a mechanism to perform integrity checks on data for validating and maintaining feature representations in a geodatabase. A feature dataset can have numerous topologies, but a feature class can only belong to one topology.

A typical topology example is a feature dataset containing public roads, land parcels, and buildings as polygon feature classes, which has rules that parcels should not overlap public roads or other parcels; and buildings should be contained within a parcel. Topologies enable these rules to be defined, validated, and broken through the exception settings.

Once the topology is built, none of the parameters can be modified. The topology must be deleted and rebuilt with the new parameters to change its properties. Therefore, careful consideration must be given to specify the parameters when creating a topology. The following snippet uses both topology creation methods:

When features are created, edited, or deleted, the topology is responsible for creating or modifying a dirty area that encompasses the envelope of the feature. A dirty area is a special type of feature in which the state of the topology is unknown. Features that are covered by dirty areas can still be edited and queried, but their topological relationships cannot be guaranteed to be correct. A dirty area must be validated to discover the topology of its underlying features and guarantee their correctness.

A name is required to create a topology. The name of the topology must be unique within the geodatabase. The IWorkspace2.NameExists property can be used to verify the uniqueness of a name.

The cluster tolerance defines how close together features must be where all vertices and boundaries in a feature dataset are considered identical or coincident. To minimize error, the cluster tolerance chosen should be as small as possible, depending on the precision level of your data. For example, if your data is accurate within 10 meters, you would want to set your cluster tolerance no larger than 10 meters and smaller if possible.

The default cluster tolerance of zero (0) represents the minimum possible tolerance value that is calculated in the units of the spatial reference of the input.

The z-tolerance is used to distinguish the z-height, or elevation, of vertices within the tolerance of one another. For example, two adjacent features of different heights can share a common edge between them. Their x,y vertices are located close together, not their z-value or height.

The value supplied for z-tolerance depends on the type of surface being modeled with the z-aware feature classes. When modeling city buildings, two buildings can be adjacent to one another and appear to share a common edge in the x,y domain. However, there might be concerns about maintaining the relative height of each building structure during the topology validation process. Setting the z-cluster tolerance to a value of 0 prevents z-values from clustering when the topology is validated. The default z-cluster tolerance for all topologies is 0 and can be obtained through the ITopologyContainer.DefaultZClusterTolerance property.

The following illustration shows how the validation process behaves with a z-cluster tolerance of 0. The vertices on the left side of the red feature (smaller squares) are coincident with the right edge of the blue feature (larger squares). This results in two vertices being introduced to the blue feature during validation. Because the z-tolerance is 0, the two new vertices have z-values of 10, equaling the values of their neighboring vertices in the blue feature. 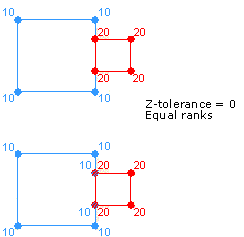 When modeling a surface, datasets can be collected with different x,y,z accuracies. In this case, it might be beneficial to set the z-cluster tolerance to greater than 0 to allow clustering during the validation process. Each feature class can be assigned a rank to avoid z-values collected with a high level of accuracy clustering to z-values of less accuracy. Lower-ranked features' z-values cluster to the elevation of higher-ranked vertices if they fall within the cluster tolerance. The z-values of vertices belonging to feature classes of the same rank are averaged if they fall within the cluster tolerance. 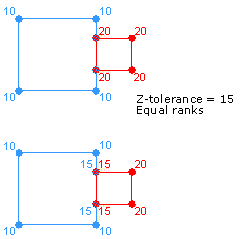 The configurationKeyword parameter allows the application to control the physical layout for this table in the underlying relational database management system (RDBMS). For example, in the case of an Oracle database, the configuration keyword controls the table space where the table is created, the initial and next extents, and other properties.

Alternatives to using the ITopologyContainer interface exist. For example, the ITopologyWorkspace interface can be used if the feature dataset containing the topology is unknown.

Add a feature class to a topology

The EventNotificationOnValidate parameter indicates if an event is broadcast when the feature class's topology is validated. The ITopologyClassEvents interface exposes the OnValidate event, which is fired each time a dirty area is validated in the topology in which the class is participating. The event returns an IGeometry reference corresponding to the area that was validated. However, this functionality is currently not supported in the ArcGIS Enterprise SDK, so set EventNotificationOnValidate to False during the feature class addition.

The following code example shows how to add a feature class to a topology:

Add rules to a topology

Each topology is created with at least one default rule (that is, it must be larger than the cluster tolerance rule). In most cases, additional rules will be added to a topology. The ITopologyRuleContainer interface provides access for adding, removing, and returning topology rules from a topology. This interface also provides access to members who control the promotion and demotion of topology errors and exceptions.

Before adding a rule to a topology, use the CanAddRule property to determine if the rule is consistent and does not conflict with any existing topology rules. For example, topology rules of the same type cannot be specified at the class level and subtype level for the same feature class.

Adding a new rule on a topology that has already been validated—in whole or in part—results in a dirty area created for the extent of the feature classes participating in the rule and a change in the topology state to esriTSUnanalyzed. An exclusive schema lock is required to add and modify the rules in a topology.

The following code example shows how to create a single feature class topology rule and add it to a topology:

The following code example shows how to acquire and use an enumerator of topology rules:

Topology validation is the process of checking the features to identify any violations of the rules that have been defined for the topology. Dirty areas represent the areas where the spatial integrity of the topology has not been validated. The entire dataset is considered dirty when the topology is first created. Then, dirty areas are created whenever a feature’s geometry or subtype is modified, or topology rules are added or removed. A topology validation operation also cleans up the dirty areas.

Topology validation is not required, but until it is performed, the entire topology will be covered by a dirty area, and the topological relationships of the features cannot be guaranteed.

The following code example shows the topology validation by calling the ValidateTopology() method:

The topology graph is an in-memory planar representation of the geometries in the feature classes participating in the topology. When a TopologyGraph is built via the ITopologyGraph.Build() method using an extent, or the ITopologyGraph.BuildFromPolygon() method using a polygon, the spatial relationships between features are discovered, analyzed, and established to form an in-memory graph of topological elements (ITopologyElement). The topological elements consist of edges (ITopologyEdge) and nodes (ITopologyNode).

Building the graph can be time consuming for large extents containing a large number of features. Keep the size of the topology graph to a minimum when providing the build extent to reduce the memory footprint of the graph, and to increase performance. To minimize rebuilding the graph, verify that the applicable area is already contained within the existing topology graph using the ITopologyGraph.BuildExtent property.

Once the topology graph is built for the applicable area, the properties and methods on the topology graph can be used to query the relationships for the shared features that each topological element represents, such as adjacency or coincidence, and perform updates on the coincident geometry. Users can also traverse the graph by enumerating through the connectivity between the topology edges and topology nodes.

A few ways to access topology elements from the topology graph are shown below:

Topological elements maintain a list of shared features they represent. For topology edges, you can enumerate through the ITopologyEdge.LeftParents and ITopologyEdge.RightParents properties to return the features (polygons) on the left and right side of a topology edge. This allows you, for example, to calculate a left and right attribute for a line that coincides with a polygon boundary, such as street and ZIP Code boundaries.

In this case, the ITopologyElement.Parents property returns the street and the two polygon features without an indication of side.

The following truncated code example calculates the left polygon for a supplied feature cursor of polylines:

In all these cases, changes to the topology elements will change the location and maintain connectivity with the underlying features.

The ITopology.State property can be used to check for the existence of error features in a topology. It has a return type of esriTopologyState. If the topology has been validated and errors were found, esriTSAnalyzedWithErrors will be returned.

The following code example shows how to get the error features for the extent of the topology:

The IErrorFeatureContainer.ErrorFeaturesByGeometryType property returns all error features of a certain geometry type.

The following code example writes the ID properties for each error feature with the specified geometry type:

The IErrorFeatureContainer.ErrorFeaturesByRuleType property returns an enumerator of error features belonging to the specified topology rule type in the supplied extent. Notice how this differs from the IErrorFeatureContainer.ErrorFeatures property in that a reference to an ITopologyRule is not required, but rather a value from the esriTopologyRuleType enumeration is. This differs from the other property in that no specific rule is specified; therefore, if several rules have the same rule type, error features from each will be returned.

The IErrorFeatureContainer.ErrorFeature property returns a specific topology error feature corresponding to the rule type, geometry type, and source feature information. The rule and geometry type are required, as topological rules can result in error features with different geometries (point, line, or polygon).

The IErrorFeatureContainer.ErrorFeature property has the following parameters that require knowledge of the rule being used and the feature classes and features resulting in the error feature:

Passing correct values into each parameter is crucial, as the property returns a null value if any are incorrect. In addition, not all parameters are applicable for each rule type. An example is the must not have gaps rule. Since gaps do not belong to features, the OriginOID and DestinationOID parameters must have values of 0.

Another common task is finding the topology errors within a given extent. The following code example shows how to do this: