The accuracy required when collecting a location depends on the type of project you are working on.

For some projects, such as a map tour, points in the vicinity of a landmark may provide enough information. For other projects, such as asset management, the location collected must be within a few centimeters of the actual location.

When collecting a location using a device's location service, position information can be determined from various sources, such as GPS, cellular, Wi-Fi, or Bluetooth networks. The accuracy of these sources varies, and the device's location service is not always reliable. To perform data collection that requires better accuracy and reliable quality control, using a professional-grade or high-accuracy GPS receiver is usually the best option.

AppStudio can use the GPS that's built into a device, or you can add an external GPS receiver to obtain high-accuracy data. There are many GPS receivers available; however, not all of them work directly with AppStudio. To use a GPS receiver with AppStudio, the receiver must support the output of NMEA sentences.

To improve the accuracy of positions, consider using a GPS receiver that supports differential corrections. If you are using an iOS device, you must also use one of the GPS receivers supported on iOS. While Esri doesn't publish a list of supported GPS receivers for Android or Windows, a list of receivers used in testing on Android and Windows is provided.

AppStudio supports NMEA 4.00 and 4.10. It can read the following NMEA sentences:

If AppStudio doesn't receive a GST sentence from a GPS receiver but does receive a GSA sentence, AppStudio estimates accuracy using horizontal dilution of precision (HDOP) and vertical dilution of precision (VDOP). The estimated horizontal accuracy is calculated by multiplying HDOP by 4.7, and the estimated vertical accuracy is calculated by multiplying VDOP by 4.7.

Differential corrections can be provided by public or commercial sources. One of the most widely used and publicly accessible real-time correction sources is the Satellite-based Augmentation System (SBAS), which is also commonly referred to as the Wide Area Augmentation System (WAAS) in the United States. It is free to use SBAS, but the GPS receiver must support it. Using commercial correction services typically requires a subscription and may also require purchasing a particular type of GPS receiver that can receive these correction signals. For more information, see Differential GPS Explained.

To directly connect a Bluetooth receiver with an iOS device, the receiver must be part of the MFi program as well as support the output of NMEA sentences. The following receivers can be used directly with AppStudio Player on supported iOS devices.

To determine the version of firmware a GPS receiver uses, pair the receiver with a device, open the device's General > About settings, and tap the name of the paired receiver.

AppStudio works with any receiver supported on Android or Windows that outputs NMEA 0183 sentences. While Esri doesn't certify any device, the following is a list of devices that have been used:

This is not a comprehensive list of all devices that work with AppStudio.

Not all receivers that support the output of NMEA sentences are configured to do so out of the box. Refer to the device's user manual for instructions on how to configure it to output NMEA sentences.

Connect a receiver to a device

Add support for a GPS receiver to your app

To integrate the use of a high-accuracy receiver with your app, you must first discover the receiver using DeviceDiscoveryAgent. Then you can use DeviceListModel to display the discovered receivers. Once the receiver is connected to your app, you can use PositionSource to display the location on a map, or use Position to show location accuracy data such as coordinate, dilution of precision, and time stamp. Use SatelliteInfoSource to report the satellites in view and in use, nmeaSource and ListView to return the NMEA data received. For information on each of these components, see the API reference guide sections of ArcGIS.AppFramework.Devices and ArcGIS.AppFramework.Positioning.

The GNSS Info sample supplied with AppStudio demonstrates all of these features. To use this sample, do the following:

If you choose to create installation files for your app, you need to enable the High Accuracy Location and Bluetooth capabilities in the app settings. Also enable Background Location if you want your app to continue recording location information when the app is in background. 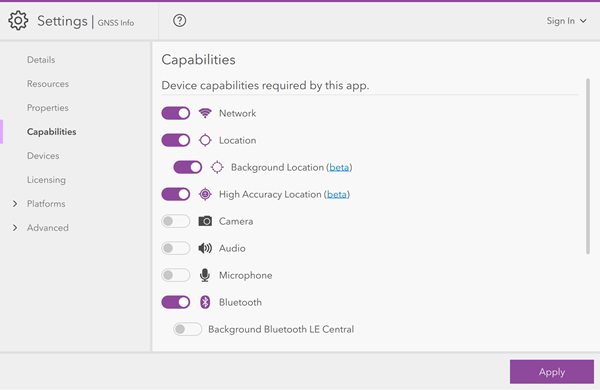 If you are publishing your app to the Apple store, you need to provide a list of third-party external accessories (in this case, GNSS receivers) that have white-listed your app. This list can be provided in ArcGIS AppStudio on the iOS tab of the Settings window. Enter the strings for devices that support your app in the External Accessory Protocol Strings field. To have your app white-listed by an external accessory vendor, you must email the vendor and supply the following information about your app:

In turn, they will send you the string that you need to enter in your app settings.

If you are using your app in AppStudio Player, the receivers that the app has been white-listed for are as follows:

When you go out into the field, you can capture a NMEA log that you can then replay when you are back in the office. This is great for doing demonstrations to colleagues whilst indoors, or for working with tech support to troubleshoot unexpected GNSS behavior.

To save an NMEA file in the GNSS Discover sample in AppStudio Player, you first must ensure that you are connected to an external receiver. Once connected, you're ready to record.

Whilst you are recording, you can carry on using the other features of the app. When you are finished moving around, come back to the Debug tab and stop recording.

Recorded NMEA log files are saved to the folder ArcGIS/ArcGISAppStudioPlayer/Logs.

On Android, this folder is located inside the app-specific storage location: Android/data/com.esri.appstudio.player/files/ArcGIS/ArcGIS AppStudioPlayer/Logs.

You can capture NMEA logs in this same way in AppStudio Player with the GNSS Discover sample, Survey123, or QuickCapture. Logs captured in any of the apps can be used in any other of these apps.