This sample demonstrates how to render graphics using a custom WebGL layer view. It can be used as the starting point for complex visualizations where the developer has full control of the rendering process.

This description assumes familiarity with WebGL and custom WebGL layer views. It is similar to the Custom WebGL layer view sample, which triangulates points into quads. This sample instead uses the new tessellate*() methods implemented by BaseLayerViewGL2D. These helpers methods allow the developer to create triangle meshes for any geometry type, including polylines and polygons.

The updatePositions() method in the original sample has been modified to convert the geometry of any graphic into triangle meshes; these meshes have special per-vertex attributes that the shader program uses to render any geometry type.

The custom layer is a subclass of GraphicsLayer. Every time that the graphics change, the layerview will reprocess all the graphics and recreate all the meshes. In the constructor of the custom layer view a listener is set up that will fire for any change to the graphic collection;when a change is detected all the graphics are reprocessed using the custom method this.processGraphic();each call to this.processGraphic() creates a promise that resolves when the mesh for that graphic has been created. When done, all the meshes are saved to themeshes member variable and the entire layer view is marked as dirty by setting needsUpdate to true, meaning the collection of meshes has changed but they have not been uploaded to the GPU for rendering.

Each graphic is converted to a mesh by a call to processGraphic(). The geometry type determines whichtessellate*() method is called to create the mesh. In the following code snippets we focus on the polyline case, but the other cases are analogous.

Attributes from the graphic can be used to drive the values of the other parameters of the tessellate*()method of choice. For instance a width attribute of the graphics can be passed as the width parameter oftessellatePolyline() method. Note that the width parameter is a pure number, and the tessellatePolyline()method does not make any assumption with regard to the units being used; from now on, we will assume thatwidth is in pixels, but a better option would be using points or some other screen-space length unit.

Each graphic becomes a promise in the this.promises array; each promise resolves to an object that contains the resulting mesh as well as the attribute and symbol objects of the original graphic, effectively binding together the mesh and all the information that may determine its appearance on screen.

Writing the vertex and index buffers

The updatePositions() method is responsible for writing the mesh data to the vertex and array buffers. Each of the seven vertex attributes is encoded as a floating point value; one last GPU attribute a_upright is taken from theupright attribute of the graphic, if present; it is true for markers that should not rotate with the map.

Your app may not need some of the GPU attributes that we use here, or it could even introduce additional ones and define arbitrary mappings between the graphic's attributes and symbol properties and what gets written to the buffers.

The vertex specification used by this sample is very simple but fairly flexible, and enables rendering of all geometry types using a single shader program. There are five geometry types. 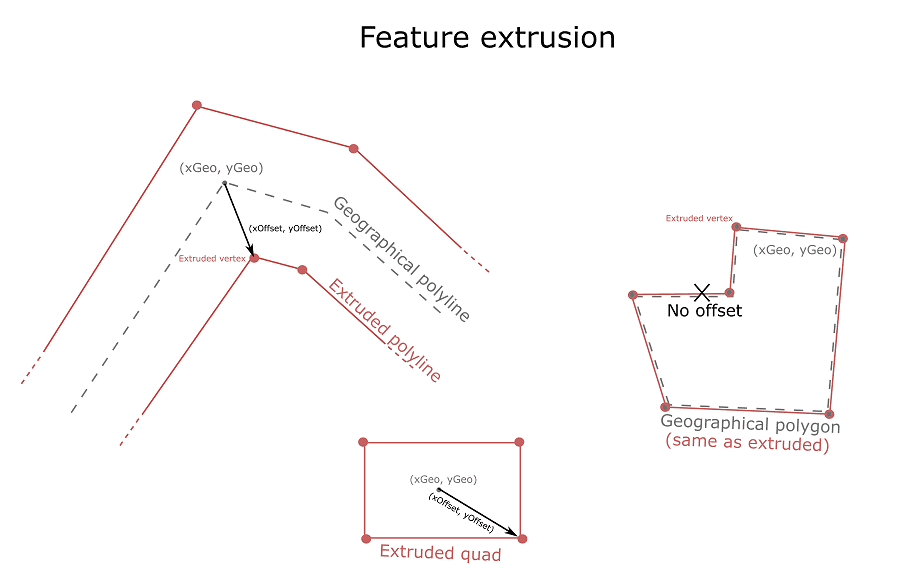 For more information on symbol extrusion and anti-rotation and anti-zoom behavior, see the animated markers and animated lines samples.

The only responsibility of the vertex shader is the computation of vertex position; since the scene is 2D, components z and w are set to 0 and 1 respectively.The computation of x and y conceptually takes place in 4 steps.

Take your time to experiment with the fragment shader; try to modify the color expression and see how the output changes.

You could even define additional attributes and uniforms and implement advanced techniques such as animations, light effects and normal mapping.