The LayerList and Print widgets have been designed from the ground up with a clean user experience and responsive design. Both follow the API's view model architecture for extensibility and customization described above.

LayerList and Print are the first two widgets that have been implemented using the new widget framework. The remaining ready-to-use widgets, (e.g. Home, Search, etc.) are planned to be updated in subsequent API releases.

The LayerList widget provides a way to display a list of layers, and switching on/off their visibility. It also supports easily adding your own custom actions, similar to the actions that can be added to a popup. 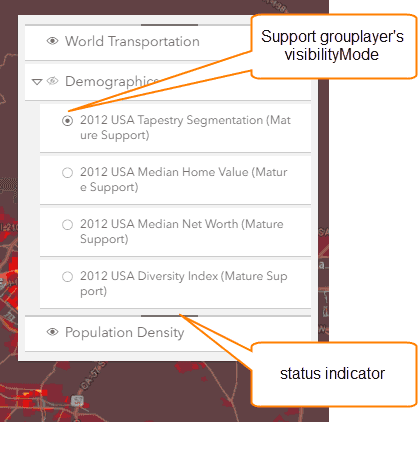 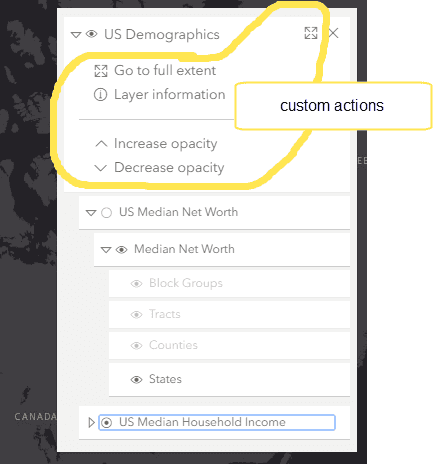 The Print widget allows users to export the current mapview for printing or saving. It connects your application with a printing service to allow the map to be exported to different file formats, including PDF which is the default output format. It takes advantage of the server-side, high-quality, full cartographic print functionality using ArcGIS Server, which can be configured with custom layout templates. 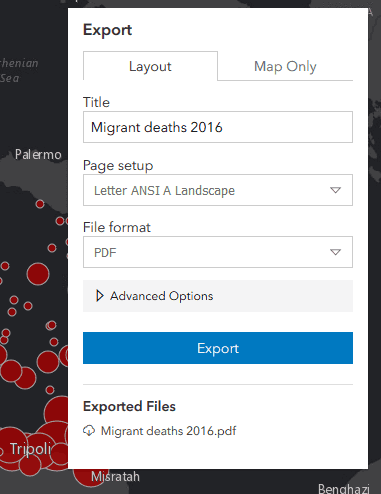 Arcade is a lightweight expression language designed for creating custom content, visualizations, and labels across the ArcGIS. In the 4.2 release of the API, Arcade is exclusively used for custom data-driven visualizations. Rather than base visualizations on the value of a layer's field, users now can pass an expression to renderers and visual variables. The expression will execute for each feature, generating a symbol based on the returned value. This is convenient when a service doesn't have the exact values you need. Arcade comes equipped with its own library of functions and allows users to write custom functions within an expression. 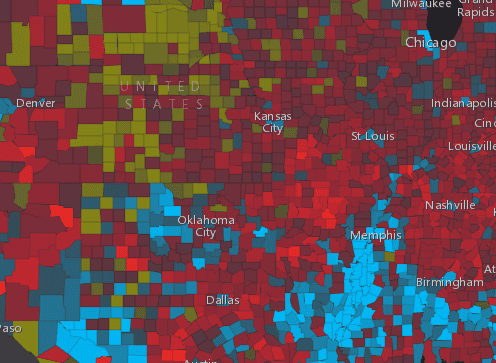 The following snippet demonstrates how you can write an Arcade expression showing the share of the vote earned in an election by the winner for each geography in the layer.

Arcade is convenient for a number of reasons, including providing the ability to save expressions to layer items and web maps in ArcGIS Online or Portal for ArcGIS. That means expressions can be authored in apps and persisted in webmaps throughout ArcGIS. In future releases, users will have the ability to use it in other contexts, such as labeling.

Be sure to read the full Arcade documentation for details about its syntax and the Arcade guide page for more examples of its usage within the API. The Create a custom visualization using Arcade sample demonstrates how Arcade can be used in this context.

While the underlying implementation is different, existing layers published to ArcGIS Online and Portal for ArcGIS will continue to work.

Improvements to event handling in MapView and SceneView

The following keyboard and pointer events are now available on MapView and SceneView:

See the Point Cloud Layer sample for more details on this topic.

Elevation values, or z-values, in 3D SceneViews for a given point can be obtained in a couple of ways. One is via the hitTest() method, which provides an approximate elevation for a given ScreenPoint. Starting at version 4.2, you can now query more precise elevation values for points and polylines directly from an ElevationLayer with the queryElevation() method.

The image below links to to a sample that demonstrates how you can query elevation at the same location from two elevation layers: one representing the surface before a landslide and the other after the landslide. You can then calculate the elevation difference based on the results. 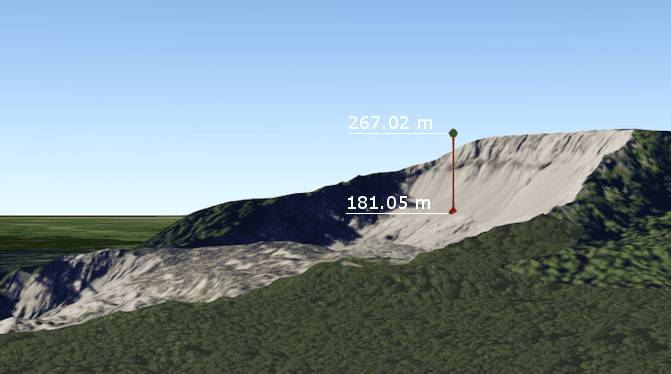 Data-driven and simple location-based visualizations can be generated with "smart" default symbology with methods in one of four objects new to the API for generating renderers with smart default symbols: 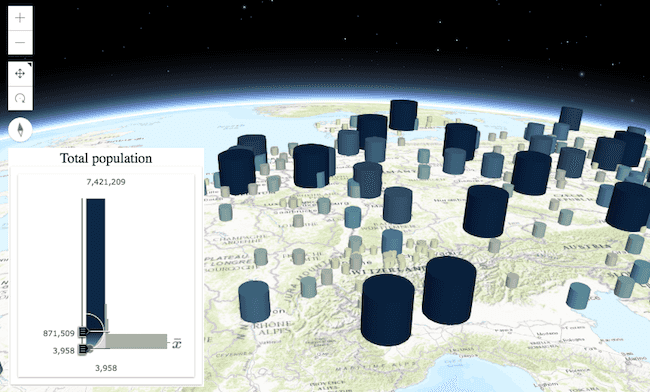 The data-driven methods available in each of these objects are built on top of of the new statistics functions: summaryStatistics, classBreaks, and histogram. These functions drive how the continuous color and size ramps are mapped to data values in the layer. The symbology component of the generator functions are based on the location, color, and size objects, which provide convenience methods for getting schemes and themes for each style.

The slider widgets in this section were removed at version 4.12 of the JS API and replaced with the following:

Three widgets were also added: ColorSlider, SizeSlider, and UnivariateColorSizeSlider providing users with the ability to easily explore spatial patterns in their data and update data-driven visualizations to highlight alternate nuances of the data such as emphasizing outliers, similar features, or features with values above or below a certain point. 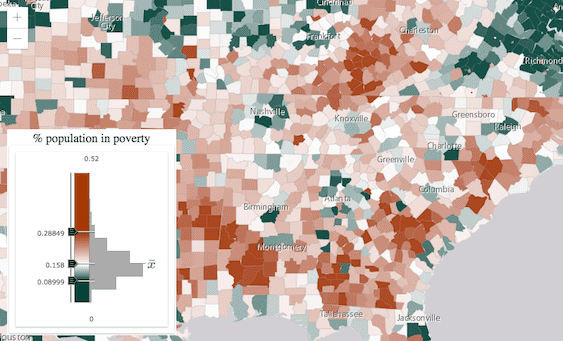 The visualization generator workflows are designed for allowing users to explore unfamiliar data and/or save custom visualizations to portal items (layers, webmaps, webscenes) with a simple UI.

The following are new samples demonstrating how the renderer generators and slider widgets work together.

When user orientation and correlation between the two locations is important, changing view center to a new location should be done smoothly. With this release the duration of the animation as well as an easing function can be given to control better the animation mode.

In the example below the camera speed grows gradually (to the power of 3), but limits the duration to 4 seconds.

To discover more custom options for goTo() in 3D see the Using goTo() in a SceneView sample.

The workers framework provides a means to improve performance by offloading computationally expensive tasks to background threads, without blocking the user interface which runs in the main thread. The workers.open() method loads the script and returns a Promise to the main thread. This promise resolves to an instance of Connection. The main thread can then asynchronously invoke methods from the worker script by calling the invoke() or broadcast() methods.

Support for Indonesian and Bosnian locales