The WFSLayer allows you to create a layer from an OGC Web Feature Service (WFS). The next generation of WFS, OGC API - Features, is supported via the OGCFeatureLayer.

You can configure the renderer, popup, and labels of a WFSLayer using a similar pattern as the FeatureLayer. Users can work with features in the WFS service using the same query and Smart Mapping APIs as FeatureLayer.

We also added utility functions that allow you to browse FeatureTypes in the WFS service before creating the layer. You can learn more about these methods in the wfsUtils documentation.

The WFS service must support WFS 2.0.0 and have GeoJSON output format enabled. 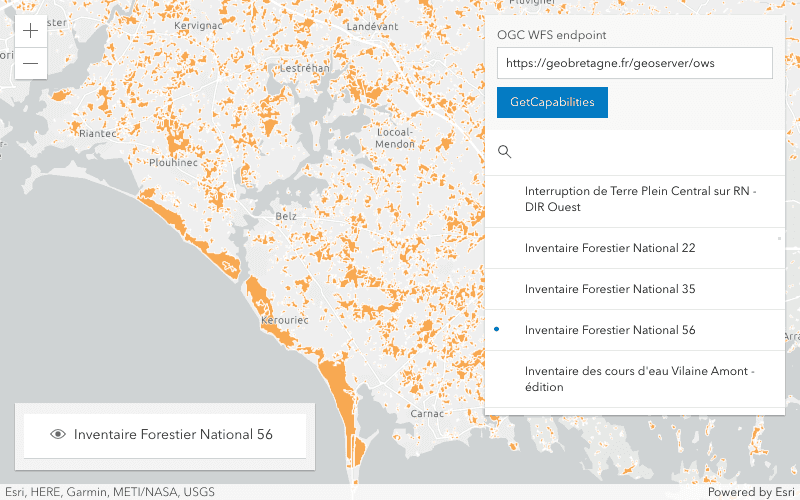 Analyze the total shadow duration from buildings and other 3D objects in your scene. The new ShadowAccumulation widget provides different visualization types for a selected time range and date. Analysis options like thresholds help to quickly assess if a scene complies with urban shadow impact regulations.

Polygon edges and Polyline segments can now be offset using new manipulators provided by the SketchViewModel. The operation allows you to horizontally push and pull edges while maintaining the shape of the geometry. In addition, new settings in SketchViewModel.defaultUpdateOptions allow to you configure the available manipulators when updating the overall shape or individual vertices.

The updated Sketch in 3D sample shows how to change these manipulators.

A new sample was added that shows how to measure parcels using AreaMeasurementLayer.

Provide a tabular view for the features of a SceneLayer using the FeatureTable widget. Users can interactively select the visible attribute columns and sort them based on the values. The widget requires a scene layer with an associated feature layer. Enable editing on the layer to update the attribute values directly in the table. 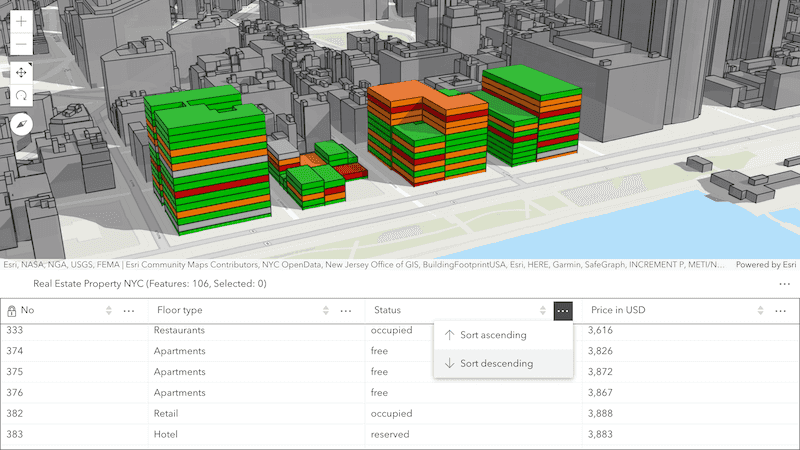 Over the next couple of releases, we are working on a multi-phase project to add support for utility network. In this release, we implemented the first phase, which added initial support for utility network, viewing associations, SubtypeGroupLayer, and simple network tracing through named trace configuration. The subsequent phases will be implemented over the coming releases and will include support for more complete tracing, subnetwork management, and advanced editing.

The SubtypeGroupLayer was added to improve the experience with datasets that currently contain feature layers with many subtypes (such as the utility network datasets). The SubtypeGroupLayer is a single, composite FeatureLayer that contains a sublayer for each subtype in the individual feature service, known as a SubtypeSublayer. This allows for configuring layer properties on each sublayer, such as visibility, renderer, popupTemplate, minScale, and maxScale.

We added support for simple network tracing through named trace configuration. The utility network's tracing function traces your network to optimize paths for resources to travel. It provides a framework that can be used to help deliver resources to customers, track the health of a network, and identify deteriorating areas. To perform a trace, load a WebMap containing trace configurations, and use the trace method.

At 4.19, we ported the majority of Task functionality to simple functional rest modules. This made it easier to incorporate into a more modular app design, and also reduced unnecessary dependencies (you only import what you want). At this release, we ported the rest of the Task and Task support classes to rest modules, and deprecated the Task and Task support classes (which will still remain available until early next year, and then will be removed from the API). We also added a new TravelMode class to make it easier to understand how to define how an object, like a vehicle, bicycle, or pedestrian, moves along a street network.

The new rest modules are functions, which do not require constructors, so you can use their methods immediately. Also, because of the more modular design, you can import just one or more methods of a rest module, instead of having to import the whole module. Here is an example of using the locator module where we only want to use the suggestLocations method:

Now we don't need to import the entire locator module, just the method of interest. This speeds up our build time, and makes our code more focused.

Expand the code snippets below to compare the differences between using a Task and a rest module:

Here is an example of using the deprecated FindTask:

And here is the same example, but using the new find method:

Over the past couple of releases, we added support for a global API key (4.18) to use with Location Services and fine-grained support for directions & routing (4.19). Version 4.20 builds on top of this by adding fine-grained control of API keys for FeatureLayer, SceneLayer, TileLayer, OGCFeatureLayer, BuildingSceneLayer, IntegratedMeshLayer, and PointCloudLayer. Access to private content via API keys is only for development and testing at this time.

We also improved support for API keys in the Directions and Search widgets. Now, both the routing and geocoding components default to the appropriate URL if an apiKey is defined. 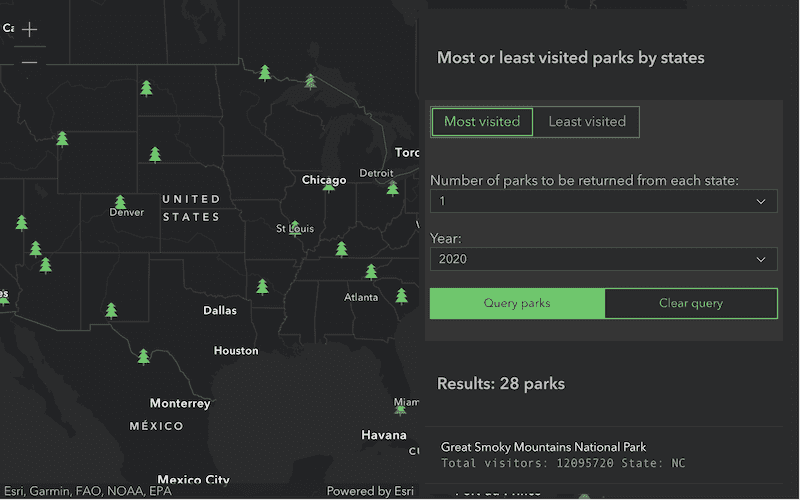 We also updated the applyEdits() method to support edits to features associated with multiple layers or tables in a single call. The returnServiceEditsOption and returnEditMoment parameters were added to make this possible. The returnServiceEditsOption parameter can return all features edited due to the database behavior that results from applying the edits. For example, if a feature is deleted and this parameter is set to original-and-current-features, the deleted destination feature is returned along with a reference to the deleted origin feature in the response.

At this release, we added a support for SDF dashed lines and data-driven line and fill patterns for VectorTileLayer. We have also improved performance of vector tiles when panning.

The OGCFeatureLayer can now be saved in a WebMap.

We added getSamples() method on ImageryLayer. This method returns sample point locations, pixel values and corresponding resolutions of the source data for a given geometry. For example, you can construct a wind rose chart that shows the most frequent wind speeds and directions at the specified location for given number of years.

Snapping is now implemented when moving 2D point geometries in both the Editor and Sketch widgets.

Starting at 4.20, when the TimeSlider widget settings are invalid, the current time segment and thumbs will be drawn in a red color with a message indicating the issue. TimeSlider's values property is deprecated at 4.20. Use the timeExtent property instead.

The Switch input was added as an additional type to FormTemplate field elements. 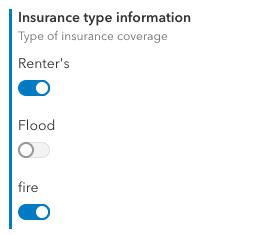 The ElevationProfile widget now has the ability to clear a drawn line with the click of the trash icon. This can be toggled on with the clearButton property on ElevationProfile.visibleElements. There is also a uniform chart scaling option which toggles a checkbox that allows the profile to be shown on the same scale along the X and Y axis, as if it were a cross section. This is useful to see the real shape of buildings or mountains and can be toggled with the uniformChartScalingToggle property on ElevationProfile.visibleElements. 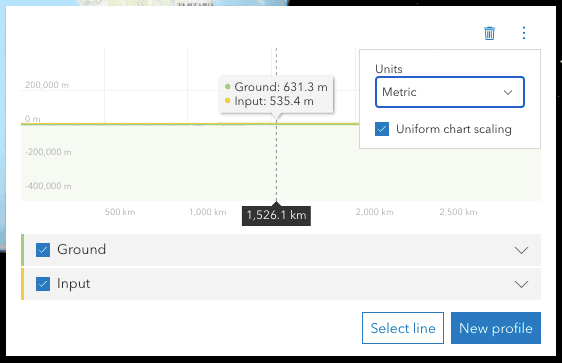 The zoom functionality has changed so that the user can click and drag a rectangle to zoom into, rather than just a range along the x axis. The ElevationProfile also now handles multi part lines, has per-profile toggles and stats and improved slope calculation.

The CoordinateConversion widget now uses sessionStorage instead of localStorage to save its state for better memory management. This is configurable with the new storageEnabled property.

We added support for generating the following renderers for imagery layers:

Each of these renderer creator modules can be found in the esri/smartMapping/raster/ folder.

Smart mapping sliders added an interactive track that allows users to drag each slider's segments. When syncedSegmentsEnabled is true, you can drag all segments in sync with the primary handle. This is particularly valuable in sliders that represent above-and-below data. Rather than allowing the primary handle modify the positions of other handles (i.e. when primaryHandleEnabled is true), you can keep handle positions independent of one another while still providing a way for the user to modify all handles at once.

With the interactive track, you can retain the syncing behavior on drag, and allow users to modify handle values without fear of the primary handle moving other values previously set by the user.

Default label formatting also improved to use compact notation for large numbers. Slider handles are also no longer constrained to the segment boundaries; you can freely move any slider handle to any position along the track.

It is now possible to increase the max zoom level on the map with the addition of the numLODs parameter on TileInfo.create(). In order to do this, additional LODs can be created via the TileInfo.create() method and passed into the MapView's constraints.

Dojo will no longer be included as part of our API downloads because the API no longer uses it (as of version 4.18).