Version 4.21 introduces many performance improvements that will decrease the draw time of your layers. These improvements are focused on polygon features and maps with multiple layers.

For complex polygons with a large number of vertices, layer draw time has significantly improved. Behind the scenes, we added a new simplification algorithm to preprocess the geometries and optimize memory management. We now use web assembly for triangulation for the majority of use cases. As you can see in the example below, this Arctic sea ice layer loads over 5x faster than the same layer in 4.20. The improvement varies layer by layer, but for most polygons with a large number of vertices, you will see at least a 2-3x improvement.

Large layers with many polygons

Because of the optimizations mentioned above and the switch to web assembly, you should also see performance improvements for layers with a large number of polygon features. The following example shows a layer with over 73,000 polygons. On average, we are seeing a 20% improvement in draw time.

Maps with many layers

At version 4.19, we improved the performance of point FeatureLayers hosted on ArcGIS Online. Version 4.21 brings these changes to ArcGIS Enterprise point services.

Control the drawing order of features

You can configure the order features are drawn in the view by setting the orderBy property of a FeatureLayer, CSVLayer, GeoJSONLayer, and OGCFeatureLayer.

This property allows you to sort features using any field or Arcade expression that returns a number or a date.

We've added the following optimizations and improvements for working with refreshable layers — layers that update their data at a specified interval. A layer is refreshable if it has a refreshInterval property.

Two new query methods were added to ImageryLayer: queryRasterCount and queryObjectIds. The FeatureTable widget can display raster catalog info associated with an ImageryLayer that has a mosaic dataset. For example, you can examine resolution and cloud cover information associated with each image in the service.

The SnappingControls widget was added to provide a simple user interface to handle all snapping functionality. This widget provides the ability to control whether snapping is enabled, which layers to snap to, and other snapping settings. SnappingControls can only be used in conjunction with the Sketch, SketchViewModel, Editor, and EditorViewModel. 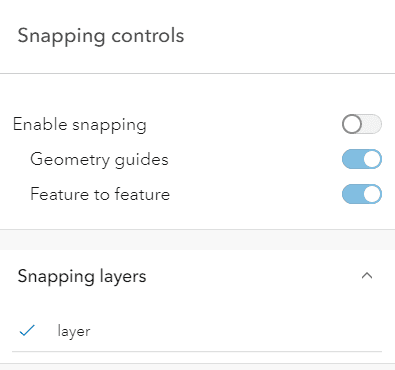 This is included in the Sketch widget by default. In the future, we plan to add this as part of the Editor and Measurement widgets.

Additionally, a point symbol was added to the mouse cursor when drawing using the SketchViewModel or Sketch widget. You can override the default symbol by setting the pointSymbol property.

An updated and improved Editor widget is coming

In version 4.22, we will introduce a significant update to the look and feel of the Editor's UI and workflow. In addition to the UI/UX improvements, there will be support for batch feature creation and the ability to easily work with snapping via a default UI.

Although these updates will add additional functionality and improve the overall editing experience, the user experience will deviate slightly from the current implementation. We do not anticipate any loss of functionality or breaking changes. Anything that is currently supported will continue to be supported in upcoming releases. As with any API redesign, we intend on taking these Editor updates slowly and incrementally. Version 4.22 will be the first release with these Editor updates. As it matures, additional capabilities will be implemented.

If you would like an early look at these changes, check out the /next repo where we will post early development updates.

The release of the new Editor update has been postponed from its original expected 4.22 release. We are now aiming to release this at version 4.23 (March 2022). We apologize for any inconvenience this may cause. Developer builds will be made available for those that wish to test these updates. Please keep posted to the /next repo for updates.

The TimeSlider widget has been updated to support custom actions, which allows you to execute custom code such as such as setting the timeExtent to a specific date or copying the timeExtent to the browser's clipboard. The trigger-action event fires whenever an action in the menu is clicked.

The Popup widget has been updated to display an error message if any errors occur when accessing its content.

Configure what elements are queried and displayed

You can override what content is queried and displayed in the Popup or Feature widgets with the featureViewModelAbilities and abilities properties, respectively. By default, any pre-defined content types are displayed. This is useful in circumstances where there may be an already-defined popup (e.g. carried over from an existing webmap), and you don't want to query and display all of its content.

The images below show the default behavior of a popup with an associated feature attachment as opposed to the same popup without the attachment. The popup view model's featureViewModelAbilities.attachmentContent is set to false.

SceneView now allows you to fully leverage your WGS84 scene layers by combining them with Web Mercator layers in local scenes.

SceneView now uses WebGL2, if available in the browser, as the underlying rendering engine. This change is the basis for future visualization capabilities and performance enhancements. WebGL1 context can still be explicitly requested for apps using externalRenderers.

You can access clustered features using Arcade expressions within the cluster popup via the $aggregatedFeatures profile variable. This allows you to filter, sort, and calculate statistics on a cluster's aggregated features exclusively using Arcade.

While you can already query clustered features using JavaScript, using Arcade allows cluster popup content to be saved and persisted in webmaps so users can understand more detailed information about clusters without having to implement cluster query logic with custom JavaScript in each app that loads the webmap. This also means the popup will be persisted if the webmap is loaded in any other ArcGIS app, such as ArcGIS Pro or an app built with ArcGIS Runtime.

Check out the Point clustering - filter popup features sample, which filters and displays information about a subset of features included in the cluster.

In the previous release, we implemented initial support for utility network, viewing associations, SubtypeGroupLayer, and simple network tracing. For this release, we improved upon network tracing by providing the ability to create custom trace configurations using the TraceConfiguration class. Some of the trace settings that can be configured with this class are functions, barriers, traversability, outputs, and filters. Tracing was also improved to return more relevant asset information after performing a trace. To learn more details about the Utility Network for this release, take a look at the following blog: What's new in Utility Network JavaScript API 4.21.

Layer effects can be persisted in the WebMap. This allows for easier configuration of effects — you can use the Map Viewer to explore effects and configure them in your WebMap, then those predefined effects will show in any apps where the WebMap is used.

WMSLayer and WMTSLayer can also be persisted in a WebMap at version 4.21.

Most CSP directives are supported and certified within the ArcGIS for JavaScript API. The API’s 3D functionality, in addition to the projection engine makes use of WebAssembly (wasm). Wasm requires unsafe-eval in the script-src directive. Adding this in CSP goes against the protection that it is supposed to provide. There is a WebAssembly GitHub proposal that discusses this in more detail. Until this is addressed, applications that make use of these two parts of the API will not be able to take advantage of using CSP.

This new guide page details how you can use the Calcite Design System in your applications. Browse the library of Calcite icons and view samples that use Calcite components with the ArcGIS Maps SDK for JavaScript.

The CIM Symbol Builder has been updated to support line and polygon symbols. Combine different symbol layers, update symbol layer properties, and watch how the CIMSymbol updates. When you've created your perfect symbol, get the symbol JSON and use it to create CIMSymbols in your own applications. 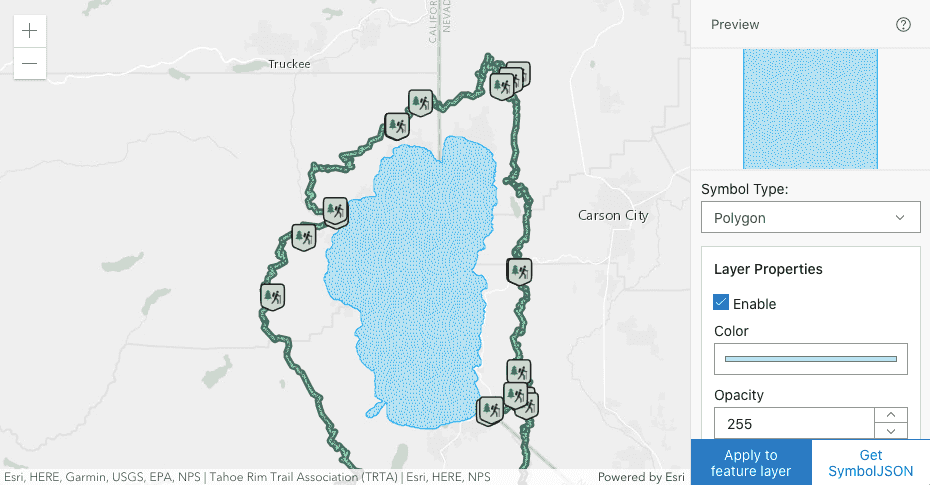 The following classes, methods, properties and events have been deprecated for at least 2 releases and have been removed from the API:

The API installation has been simplified, so you no longer need to modify any files. Just download and start using. We've also added a test application to the API downloads to quickly verify your API installation.