The API's ES modules are now ready for production use, they were originally released in beta at version 4.18. These modules make it easier to do local builds of the API when integrating with third party frameworks and build tools. They are available for installation via the NPM package @arcgis/core.

Install the modules by running npm i @arcgis/core. Then, you can use native imports like this:

The benefits of this approach include:

Visit the Introduction to tooling guide topic to learn more about the new modules and whether you should migrate. There are also sample apps that demonstrate the basic concepts for getting started.

NPM installs of @arcgis/core and arcgis-js-api for local builds now use a CDN as the default way to retrieve assets at runtime. The assets include styles, images, web workers, wasm and localization files. The new default setting will make initial installs and configuration much easier, and can still be overridden using config.assetsPath when working with local assets.

At this release, we improved the performance of point FeatureLayers hosted on ArcGIS Online. The FeatureLayer will now fetch all its features at once from the server. Once loaded, the features won't need to be re-requested from the server, which will make future redraws after panning and zooming much faster. We will continue to add support for other feature services in the next few upcoming releases.

Self snapping support added to 2D

Self-snapping is now supported when creating or updating line and polygon features in 2D. This makes it easier to create geometries that have parallel lines and right angles. To enable snapping, set the snappingOptions.enabled property to true in the Sketch or Editor widget. 3D support for self snapping was previously implemented in 4.18, and is now no longer in beta.

Self snapping will snap to perpendicular lines (right angles), parallel lines, an extension of a line, and to a vertex of the feature being edited, as shown in the images below.

We also added support for feature snapping in both 2D and 3D. Now, it is possible to snap to existing features from a FeatureLayer, GraphicsLayer, GeoJSONLayer, or CSVLayer currently loaded on the Map. In order to utilize feature snapping, the SnappingOptions.featureSources must be assigned to one or more of the layers on the map.

Enable snapping in the Sketch widget

The Sketch widget's UI now includes an options menu to toggle snapping on/off. This control toggles the Sketch.snappingOptions.enabled property. By default, snapping is disabled, but it can be enabled either by toggling the switch in the widget's UI, or by holding the Ctrl key while drawing a graphic.

The Editor widget now provides the ability to set snapping when creating or updating features. This is all handled programmatically via the API by setting the snappingOptions property. The snappingOptions object contains various properties for configuring sketch snapping. These configurations include enabling/disabling both self and feature snapping. Information on these two forms of snapping is provided in the SnappingOptions documentation. In addition, please refer to this documentation for any known limitations while working with snapping.

Currently, the snapping functionality offered in the Editor widget does not provide a UI similar to that of the Sketch widget. This behavior will change in upcoming releases with an updated UI to help with configuring snapping options.

The Editor widget will now automatically disable the view's popup when selecting a feature to edit. It is no longer necessary to add a line similar to the following:

Additional input types have been added to FormTemplate field elements. These input types include:

In version 4.18, we added support for a global API key to use with Location Services. Version 4.19 builds on top of that and makes it easier to use by supporting more fine-grained control of API keys, easier to work in conjunction with ArcGIS Identity, as well as improving default services when API key is used.

Identify the shadow of individual 3D objects, such as buildings or trees, when clicking on the feature or calling highlight(). Combining the new shadow highlight with the Daylight widget you can determine how each building contributes to a certain shadowed area, for any season and time of day. You can configure the strength of the highlight by setting the new SceneView property highlightOptions.shadowColor and additional opacity settings to allow you to differentiate shadows that overlap with the highlighted one.

Interactively scale and rotate line and polygon geometries using the Sketch and Editor widgets. Clicking on a line or polygon being updated will toggle between reshaping and transforming the feature. The available modes can be customized through the SketchViewModel.defaultUpdateOptions settings. To scale a geometry by keeping its proportions, keep the CTRL button pressed during the transformation.

A new lighting and shading model adds more contrast and definition to your 3D content. With the 4.19 release, existing scenes will benefit from this visual improvement when SceneView.qualityProfile is set to medium or high. Additionally, objects with Physically-Based Rendering (PBR) materials, such as used in WebStyleSymbols, display light reflections on glass or metallic surfaces. 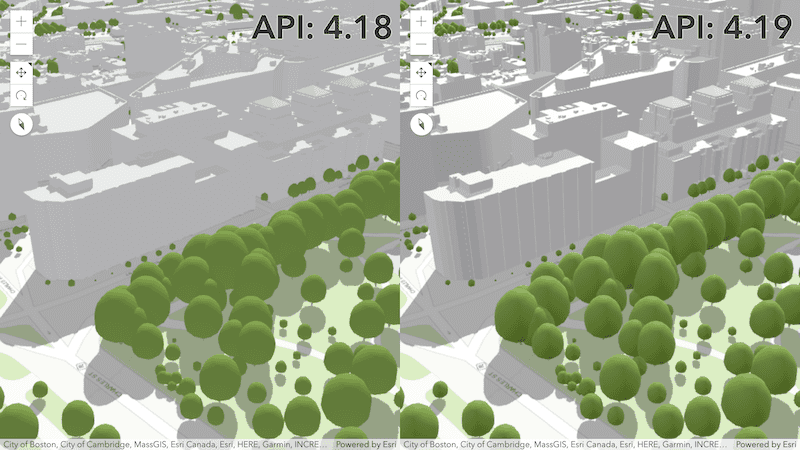 Added a Magnifier to the MapView and SceneView, which displays a portion of the view as a magnified image. The Magnifier can improve the editing and drawing experience of applications utilizing the Sketch and Editor widgets, especially when pairing with the new snapping functionality. 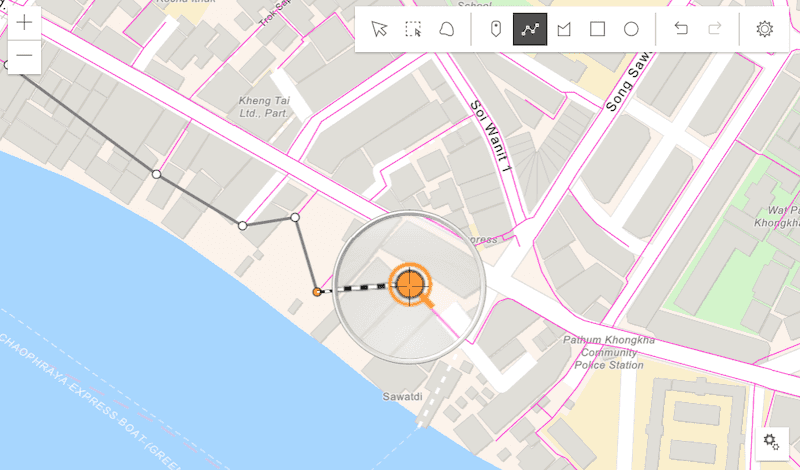 We introduced floor awareness, which brings indoor GIS data representing floor plan features to your maps and layers. You can now specify the floorInfo property in your WebMap, WebScene, FeatureLayer, or SceneLayer to make your map or scene floor-aware.

Filter the table by geometry or extent

The Popup widget now dynamically displays content in the header and footer to handle longer strings. This can be seen when displaying action text with a large amount of characters.

In addition to the UI update mentioned above, two additional title and description properties were added for the Attachments, Fields, and Media content elements. This is shown below in the various screen captures.

All widgets now support the following methods: when(), isResolved(), isFulfilled(), and isRejected(). You can use these methods to return a promise when the widget is created or to verify if the widget was created successfully.

The MapNotesLayer can now be edited if it was created in the new Map Viewer. Map notes can be added, updated, and deleted - allowing you to easily sketch, add, remove, or update notes from any map, then persist your changes using WebMap.save(). Map notes created with Map Viewer Classic can be displayed, but the map notes cannot be modified or accessed with this class. Check out the MapNotesLayer sample to see it in action. 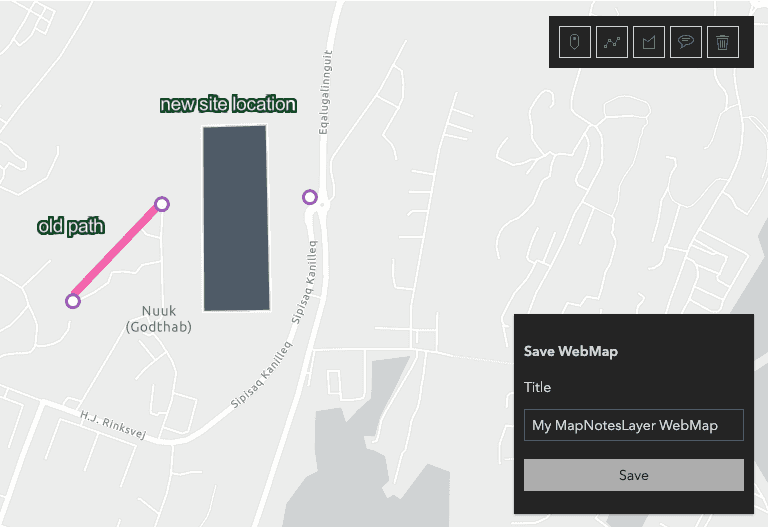 At this release, we added a full support for lookup, ramp, variable binding, color, math (with an exception of distance), and zoom expressions and a limited support for type, feature data, decision, and string expressions. We will continue to add support for all expressions in coming releases.

We added Browse features as a new default action to the cluster popup. This allows you to browse and select individual features included in a cluster directly from the cluster popup. The Zoom to action was updated to zoom to the extent of a cluster's features. You can explore these new actions in any of the cluster samples. Also, point clustering is no longer in beta.

The data visualization guide was revamped with more than 20 new conceptual topics and four chapters. Explore the guide to learn about visualization best practices, the various layer styles available in the JS API, and browse the hundreds of symbols and color ramps provided for easy copy/paste use in your apps. 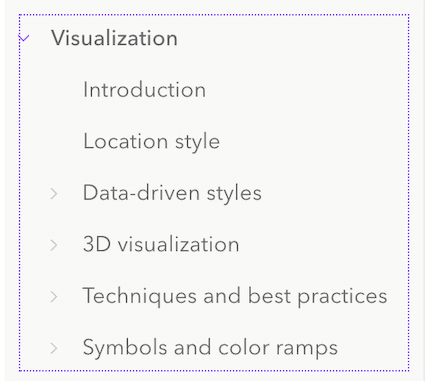 Added normalizationType to support various transformations in histogram and summary statistics. Includes support for normalization-total, log, natural-log, and square-root. Check out the histogram sample to explore these new normalization types.

We've ported the majority of Tasks functionality to simple functional rest modules. This will make it easier to incorporate into a more modular app design, and also reduce unnecessary dependencies (you only import what you want). The next release will see the rest of the Tasks ported over, and then we will deprecate Tasks. Note that esri/layers/support/AttachmentInfo has been moved to esri/rest/query/support/AttachmentInfo.