This release provides many updates for FlowRenderer (formerly known as AnimatedFlowRenderer) that bring this renderer out of beta. FlowRenderer supports color, size, and opacity visual variables, which can be used on the layer's Magnitude field. You can also change the direction of the flow using the new flowRepresentation property. FlowRenderer can now be used with the TimeSlider widget, and the flow visualization will update at each time slice. Lastly, we added support for smart mapping and webmap persistence.

The following sample uses the FlowRenderer with visual variables to visualize wind speeds during Hurricane Ida.

At version 4.23, you can switch the spatial reference of the MapView by changing the spatialReference property or by changing the basemap using the BasemapGallery or BasemapToggle widgets. The following changes were made as part of this work:

Check out Client-side projection and Basemaps with different projections samples to see this in action.

Emphasize high density areas in your scene thanks to the added support for HeatmapRenderer in SceneView. Visualize point features that are clustered by location or using a layer’s attribute values. The resulting raster can be draped on the ground or on top of integrated mesh layers, while supporting the same color ramps as MapView to render intensity. A new property referenceScale allows you to adjust the blur radius independent of the current viewing scale.

Try out the new heatmap sample to explore traffic accidents in Munich. 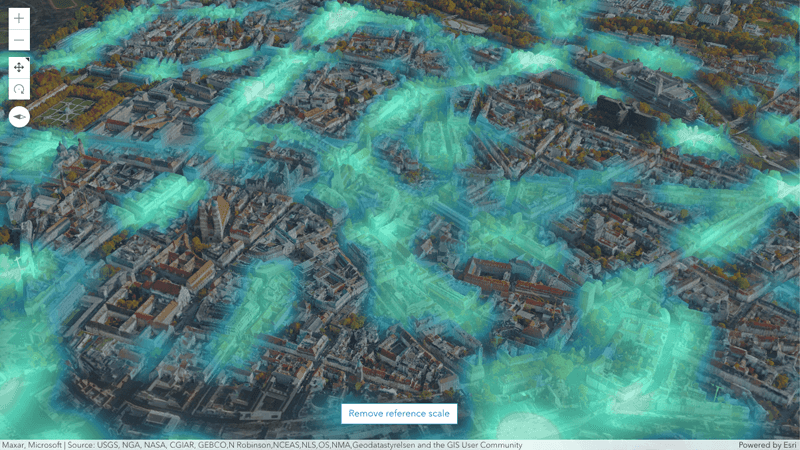 Change the weather in your scene using the new weather widget. Each of the available weather types is represented through built-in Calcite icons, while a slider allows you to interactively adjust the cloud cover or fog density.

Discover the widget in the updated weather sample.

Add markers to your line features to emphasize their starting and ending points, or arrows to indicate a direction. The new LineStyleMarker3D class provides a variety of styles aligned with the existing 2D capabilities. The markers can be driven by attribute values and support using visual variables.

Explore the first expedition to Antarctica with the help of new line markers and label placement in this sample.

Improve the appearance of labels and text in your scenes by using the new styling options on TextSymbol3DLayer. Updates include decorations (such as underlines and strikethrough), settings for better text layout (i.e. line spacing and alignment), as well as loading custom fonts. Emphasize specific labels or enhance readability by adding a background to the label symbol. 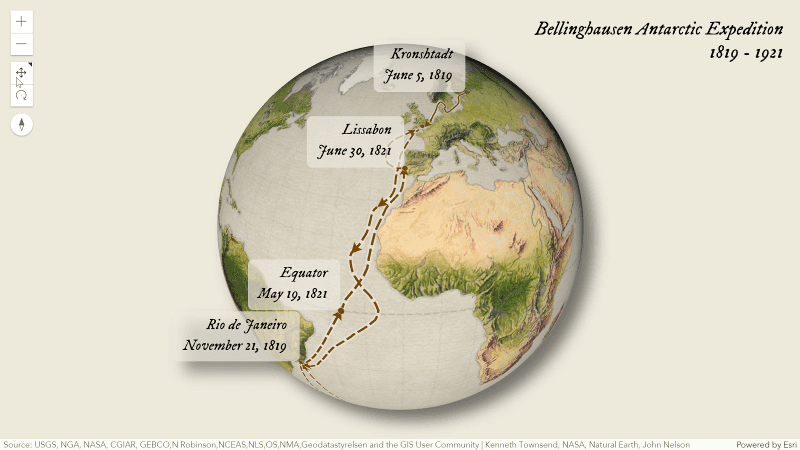 Light up your 3D visualizations around the globe, especially in polar areas. A new VirtualLighting positions the light source relative to the camera, minimizing the amount of visible shadows. Assign it to SceneView.environment.lighting as an alternative to the existing lighting, mimicking realistic sun light.

See how the new virtual lighting helps explore exaggerated terrain around the globe in this sample. 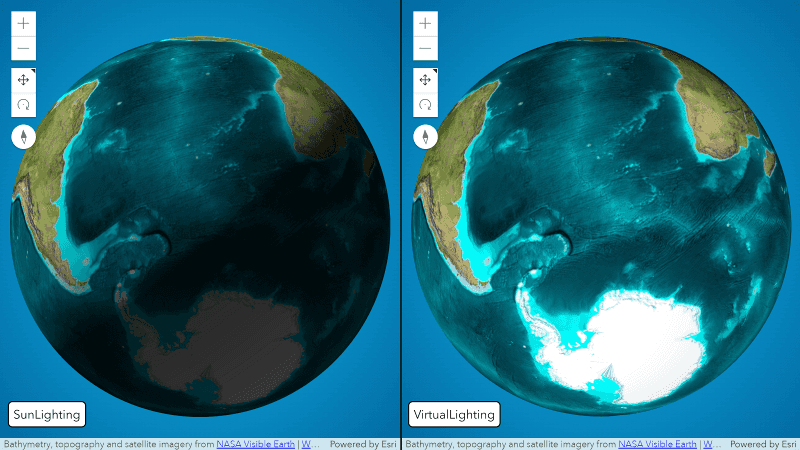 Programmatically place client-side measurements, slices and line of sight analysis in your scene. With this release we are introducing new analysis types DirectLineMeasurementAnalysis, AreaMeasurementAnalysis, SliceAnalysis and LineOfSightAnalysis that can be added to SceneView.analyses for visualization and evaluation. You can also pass the analyses to the constructor of their respective widgets and view models for further user interaction.

A new sample shows how to create analysis from geometries. 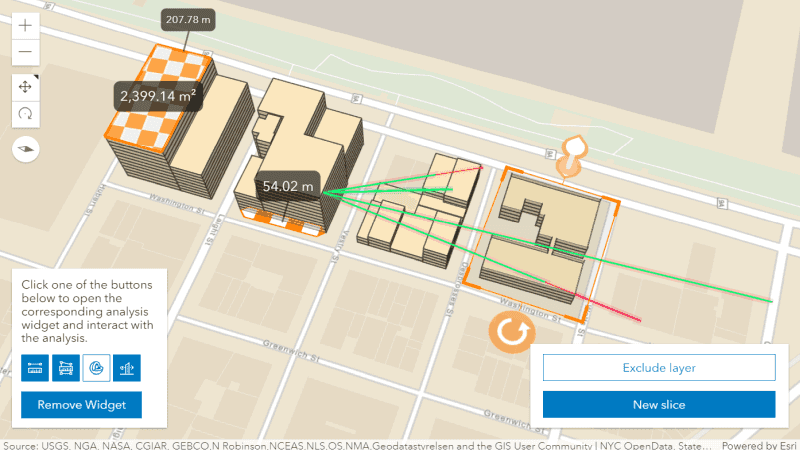 This release introduces significant changes to the Editor widget, including an updated UI that contains SnappingControls and a selection tool. The updated UI streamlines the process for creating and updating features which includes support for batch (continuous) feature creation. It is now possible to create multiple features of the same type at once. When doing so, a form displays for each newly-created feature and attributes can be updated as needed.

These updates are just a few of improvements on the Editor roadmap. Expect to see more updates as future versions are released.

Notice how the snapping UI is automatically integrated into the Editor. After choosing the type of feature to create, it is possible to continuously create new features. The attributes provided are saved within each feature and can be updated as needed.

The FeatureForm widget added support for contingent attribute values. Contingent values are a data design feature (introduced in ArcGIS Pro 2.4) that restricts the valid field inputs in one field based off the field value chosen in another field. This helps enforce data integrity in editing workflows. 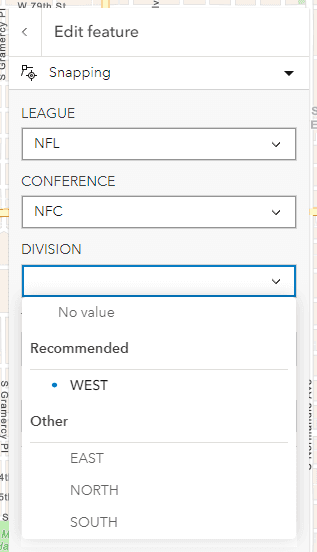 Use reactiveUtils to watch properties

This release introduces reactiveUtils to provide new utilities and convenience functions for watching properties inherited from Accessor. It offers significant enhancements over watchUtils. Some of these enhancements include: improved developer usability and type safety, (i.e. using optional chaining of object properties), as well as the ability to work directly with Collections and multiple properties. reactiveUtils can watch the state on a variety of different data types and structures, and it allows for combining values from multiple sources, this reduces or eliminates the need to create multiple watchers.

The following code snippets compare watching the view.updating property with both watchUtils and reactiveUtils. Take note of the different syntax.

Checkout the Property Changes with ReactiveUtils sample for a demonstration of these new capabilities.

RouteLayer is a new layer that provides routing analytics and route visualization in 2D MapViews. A RouteLayer consists of two or more stops, and optionally, barriers. Solved routes can be saved individually as an ArcGIS Online or Portal item, or as part of a webmap. See RouteParameters for more information on input parameters for solving a route request. Results include overall travel time, distance, and turn-by-turn directions.

Checkout the Intro to RouteLayer sample to see it in action. 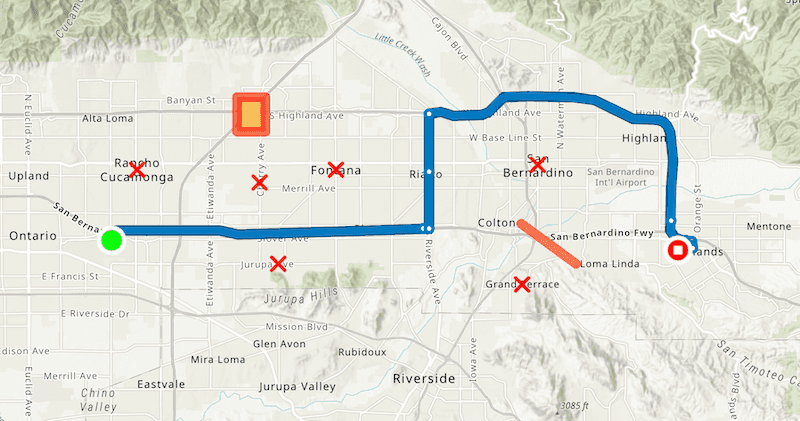 Sketch graphic highlighting can now be overridden with MapView.highlightOptions.

Visible elements are supported on many widgets to control what UI elements are displayed in the widget. In this release, we added VisibleElements.snappingControlsElements to the Sketch widget to show or hide snapping UI elements.

The FeatureTable widget had some significant updates this release: 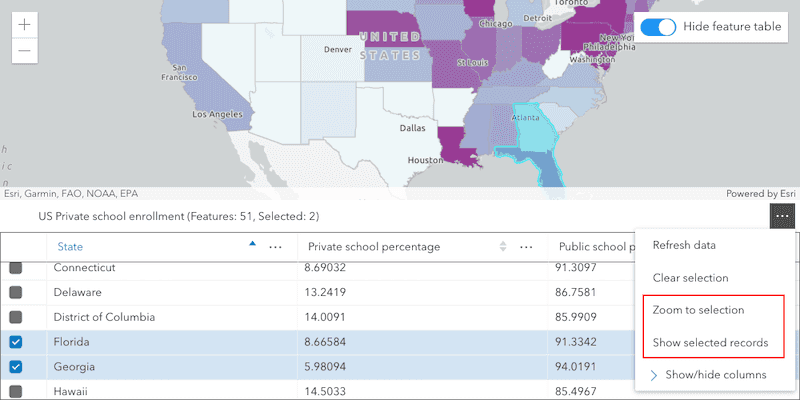 Popups will display attachments as thumbnail images instead of listed links by default when working with a webmap that is using a default template or when calling the createPopupTemplate method on a layer.

In addition, some updates were made for controlling the behavior of popups. The new chartAnimation ability has been added to the FeatureViewModel to control the animation of charts residing in media content elements within Popup and Feature widgets.

The shouldFocus option for the Popup open method has been added as an accessibility enhancement to provide a way to set focus to the popup automatically as it opens.

Update the color and opacity of the trace result with the defaultGraphicColor property in the UtilityNetworkTrace widget. Additionally, you can override the label and description headings and sub-headings of both the "Starting points" and "Barriers" sections of the widget using the inputSettings property. Both the starting and barrier point graphic symbols can also be overridden with the inputSettings. Only SimpleMarkerSymbols and PictureMarkerSymbols are currently supported.

You can restrict users to only move the slider thumbs inside a subset of the min and max using the new effectiveMax and effectiveMin properties on Slider widget.

This can be useful for representing ranges of values in a dataset that should not be selected or filtered with the slider. For example, you may want to use a slider to represent the full range of data, but prevent the user from including outliers in a selection of features.

ImageryLayer can be highlighted now as we added ImageryLayerView.highlight() method.

We've improved the performance when working with large image services with multiple bands by switching to Web Assembly for the LERC decoder for ImageryLayers.

In previous releases, VectorFieldRenderer.symbolTileSize value was capped at 30 for performance reasons. At 4.23, you can set the symbolTileSize to a number less than 30 and the renderer will perform well.

Each release, we continue to improve support and fix bugs for CIMSymbol. In this release, we added support for overriding effects, which allows you to use a PrimitiveOverride to override a property defined in a CIMGeometricEffect.

We have also updated the CIMSymbol documentation so that you no longer need to view the CIM specification in order to create your CIM symbols. All supported properties from the CIM spec are included in the API Reference, along with images and code snippets. 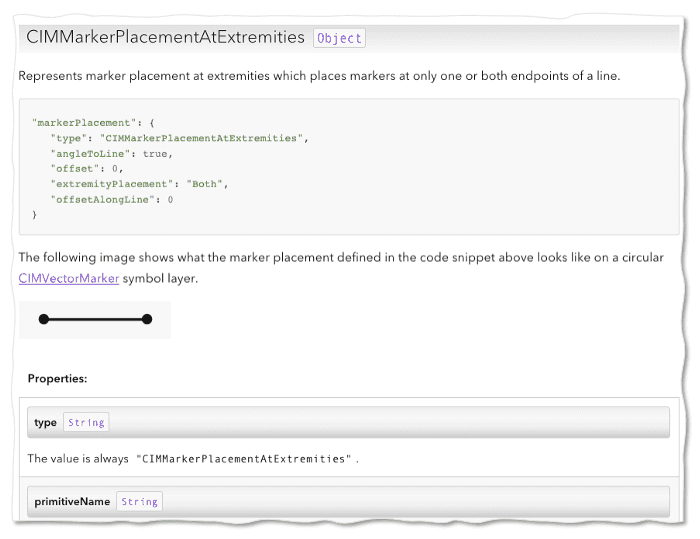 OAuth authentication now defaults to automatically use short-lived access tokens generated via two-step with Proof Key for Code Exchange (PKCE) flow. This will be the default behavior for applications using the default page redirection for OAuth sign-in. This update follows the recommendations suggested in the OAuth 2.0 Security Best Current Practices specifications.

Prior to this version, the default was to use the one-step flow. Once authenticated, an access token would append as a URL hash to the client in a single step. This could potentially cause problems if the token was leaked or stolen since any resource accessible using this token would also be compromised.

Applications utilizing two-step authentication with user sign in via a popup window should opt in by setting flowType = "authentication-code". In addition, any existing callback page should be updated to support it. To aid in this, the default oauth-callback.html has been updated to allow for the two-step approach, although it will still work if using the one-step flow.

This update should be transparent with no changes needed by the developer if popups are not used for signing in and the application accesses ArcGIS Online or a version of ArcGIS Enterprise that supports PKCE. 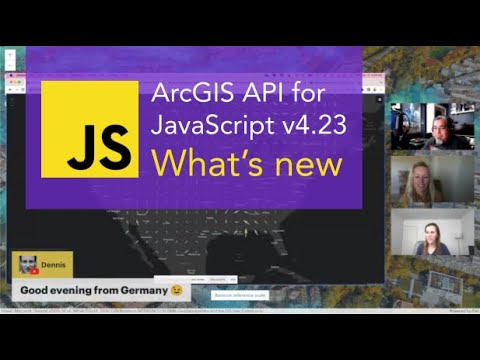