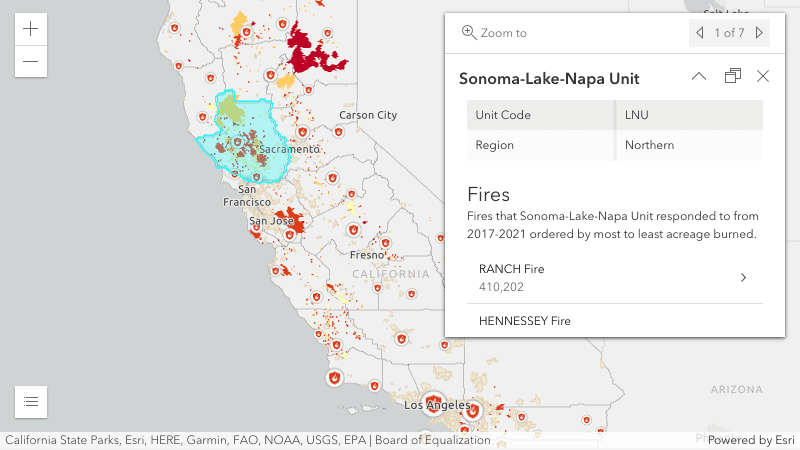 FeatureReductionCluster now allows you to override the default style of point clusters with either a dedicated cluster symbol or a renderer. By default, clusters are styled based on the layer's renderer so that the cluster symbol either represents the average value of the features in the cluster, or the most common category.

You can now define a custom cluster symbol using the FeatureReductionCluster.symbol property. This will style clusters consistently, while retaining the symbology of individual points defined in the layer's renderer. 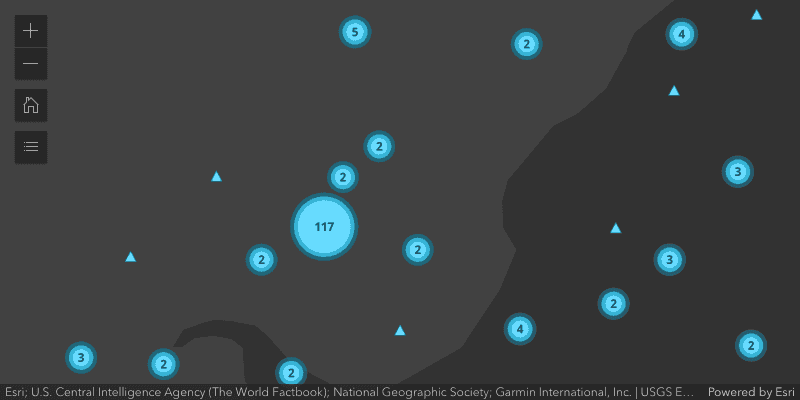 Having the ability to create cluster renderers means you can now represent clusters as pie charts. This requires creating aggregate fields for each chart slice and including them in a PieChartRenderer. Because this process can be tedious, we added the pieChart.createRendererForClustering method, which generates the required fields and renderer to set on the featureReduction property of the layer. See the Clusters as pie charts sample to learn more.

Draw x, y, and z coordinates while snapping to edges and vertices of existing 3D features in your scene. In addition to feature layers, add 3D object- and building scene layers as candidates to SnappingOptions.featureSources.

Try it out in the 3D editing sample.

Add dimensioning to show lengths and distances in your scene. Interactively dimension existing features using the previously mentioned 3D snapping. Or place dimensions programmatically using a new type LengthDimension. Using DimensionLayer you can save dimensions to a WebScene and toggle their visibility through slides.

Explore, add and update length dimensions in this new sample.

A dynamically shaded relief depending on the sun position helps you perceive shape and structure of the terrain. It also contributes to making basemaps more visually appealing in scenes.

Take a look how this improvement helps to understand terrain in 3D.

Drill deeper into your voxel data using new client-side render capabilities. Visualize separate isosurfaces by only showing voxels that share a specific variable value. To look inside the data, a new property VoxelVolumeStyle.dynamicSections allows you to define vertical planes that cut through the volumes.

FeatureForm calculations can now access data from other layers

The FeatureForm widget now allows you to access data from other layers with FeatureSet functions in field expressions. That means you can derive values based on another layer. For example, you can now calculate fields in a point layer based on values from an intersecting feature in a polygon layer, including layers not part of the map.

We also made significant internal updates to the field calculation process to improve performance:

Since the Editor widget encapsulates FeatureForm functionality, the updates mentioned here will also be visible in the Editor. Check out this sample demonstrating a rich form experience using multiple field expressions.

Tooltip support was added to 2D Sketch, SketchViewModel, and Editor. The tooltips can display total length of polylines and area of polygons while drawing new features and updating existing features. Support for tooltips in 3D was added at version 4.24.

Delete features from the FeatureTable widget

The FeatureTable widget now supports deleting selected features via the deleteSelection method. For the method to be successful, there must be at least one selected row in the table, editingEnabled must be true, and the underlying data must support deletion. If deletes are supported, the table's menu will update with a Delete selection menu item.

The following enhancements were made to the Editor widget at this release:

FeatureLayer was updated to propagate edits to other layers affected by a single edit. This means that edits to other layers that are a result of attribute rules or composite relationships will now cause the layers affected to refresh and render the updated features. This feature is supported only when calling FeatureLayer.applyEdits with returnServiceEditsOption enabled, and the service returns edits for other layers. This is also supported for SubtypeGroupLayer.

We enhanced MapImageLayer to highlight the selected feature when displaying its Popup. See the updated sample below.

We also have updated the documentation for ImageryLayer and ImageryTileLayer to give an overview on how to work with multidimensional data. 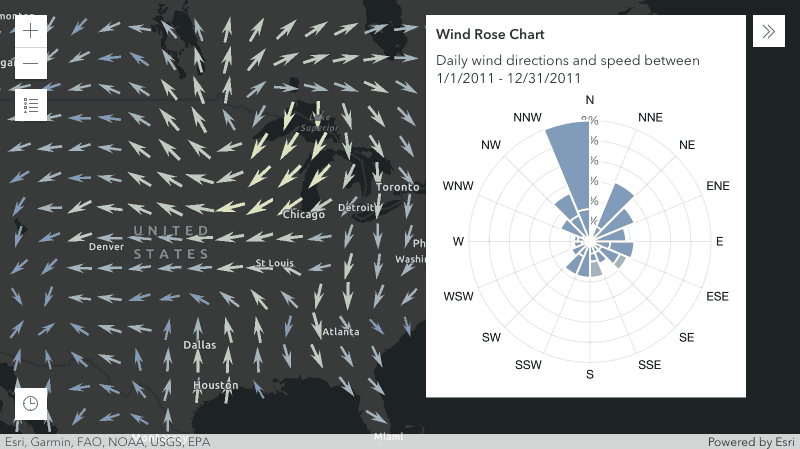 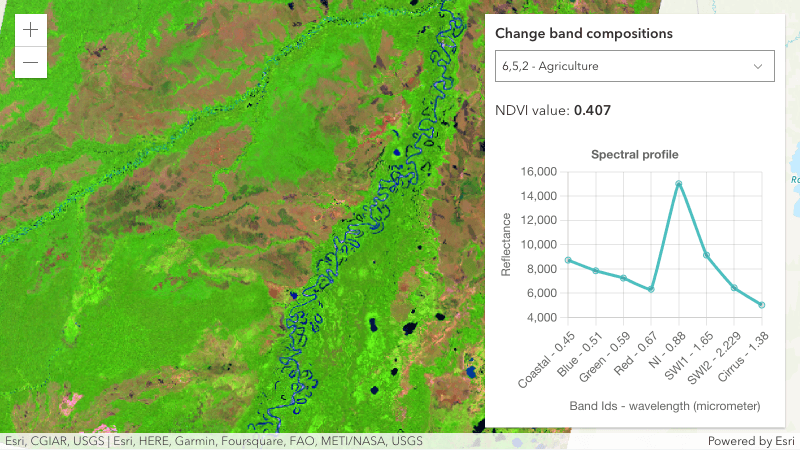 We made performance improvements when changing ImageryLayer.renderer for lerc format. At version 4.24, a request to the server would be made every time the renderer was updated. At this release, all updates are happening entirely client-side, as shown in the following GIF.

CSVLayer and GeoJSONLayer can be loaded from csv and geojson portal items respectively by either setting portalItem.id on the layer or via Layer.fromPortalItem() method.

Make a connection to a stream service web socket without having to add the StreamLayer to the MapView, using the StreamLayer.connect() method. Once the connection is established, you can listen to the stream connection's data-received event. We also improved the indicator in the LayerList for StreamLayer connection status.

UniqueValueRenderer now allows you to group multiple unique values under a common heading. This is useful for improving the readability of maps with a large number of unique categories. Headings and groups are configured in the uniqueValueGroups property. See the Unique value groups with headings sample for more information. 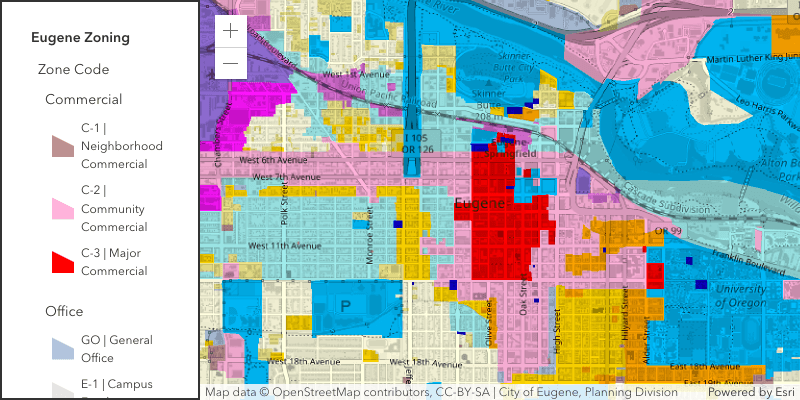 The ability to group unique values to a single symbol and categorize groups of symbols under headings has been available in ArcGIS Pro for some time. Web maps published from ArcGIS Pro 3.1 (coming in 2023) or later will render legends properly. Web maps authored with headings and grouped symbols in prior versions of ArcGIS Pro will not display the legend properly. These maps must be re-saved in ArcGIS Pro 3.1 or later to pick up the change. Support for authoring these categories will come to the Map Viewer in 2023 as well.

For increased accessibility, we made many improvements for better color contrasts in CSS themes, better use of ARIA roles and attributes, and various other accessibility related changes to BasemapGallery, Bookmarks, Directions, Editor, FeatureForm, Print and the five measurements widgets. This makes for a better experience for both users with screen readers and users in general. We plan to continue to improve accessibility in our API in upcoming releases.

We updated the loading indicator in the LayerList, BasemapLayerList, and TableList widgets from a blue line to a less distracting blue circle that will display while the layer is loading. 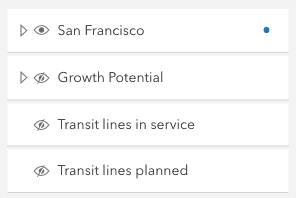 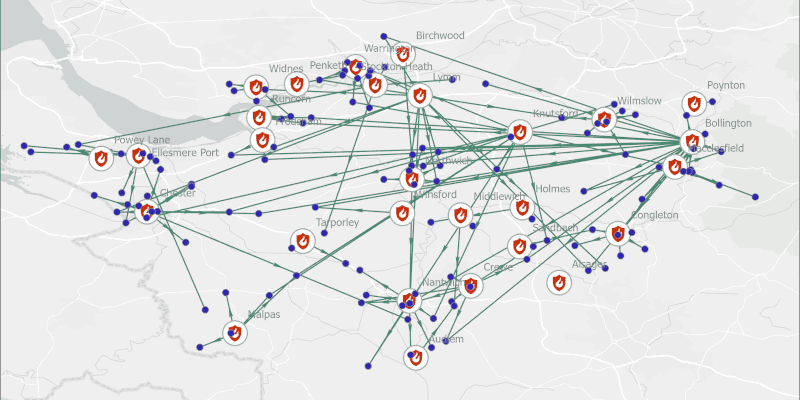 Binning no longer in beta

FeatureReductionBinning is no longer beta and can now be saved to the web map. This includes updates for how to define aggregate fields. See the binning samples to learn more about this aggregation method. 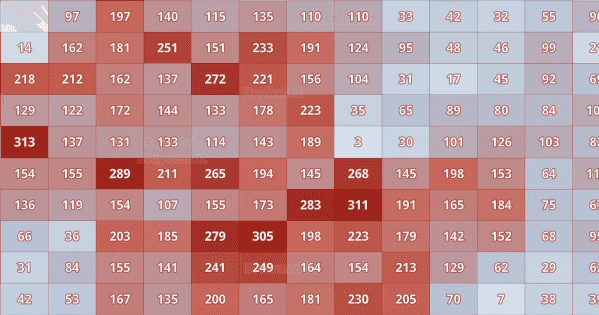 GeometryEngine added the intersectLinesToPoints method, which returns the intersection of two polyline geometries as an array of points. 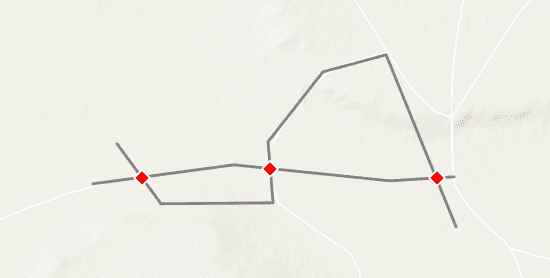 At this release, we've added support for symbolService.generateSymbol(), which connects to the REST API to convert a SVG to a CIMSymbol. Converting your SVG to a CIMSymbol allows you to take full advantage of all the different capabilities of CIMSymbols, such as creating multi-layer symbols, using data driven primitive overrides, and more! You can see this new feature in action in the updated CIM Symbol Builder.

There are many wonderful contributions that help explain or showcase concepts related to the ArcGIS API for JavaScript. To emphasize these efforts, we've created a new Blogs page that offers a curated list of relevant blogs organized by concepts.

Within each concept, there is a list of blogs ordered by the corresponding version of the ArcGIS API for JavaScript at publication, with publication dates, and links to read the actual blogs. You can access this new page at the top right of the navigation bar.

API versions 4.12 and older have been retired. The modules will continue to be hosted on the CDN, however, you will not be able to open technical support tickets on those versions. We recommend actively upgrading any applications using retired versions. For the support status of all API versions, visit the Product Support page.

Removal of non-esri packages from CDN

The CDN on js.arcgis.com will no longer host the following AMD packages for version 4.25 and later: dgrid, dijit, dojo, dojox, dstore, and tslib. API versions 4.24 and earlier will continue to include the packages. The Dojo loader will continue to be included, to allow for AMD support in the browser.

Applications that require these non-esri packages can use dojoConfig to make them available from other locations. For example, this snippet specifies locations using the latest version of the 3.x CDN. It is important to define dojoConfig in a script block before the API is loaded. If the order is reversed, the configuration properties will be ignored.

More information is available in the dojoConfig documentation.

In a continuous effort to optimize the performance of the API, more specifically the load time, the decision was made to stop bundling the Popup with the MapView and SceneView. The Popup widget receives new features regularly, such as when browsing related records. Each new feature added to the popup widget increases the amount of built code and size of the widget that is being sent to the web browser. For example, the Popup module, which is bundled with the MapView, represents around 50% of the size of the bundle.

In a future release, the Popup widget loading will be deferred until the view is ready and will only be loaded if there are layers with a popup configured since it is only useful once content is displayed on the view. This will not disturb the user experience and the popup will still show up when the end user clicks on popup enabled content.

If you are interested in testing this optimization, make sure to check out the early access release description in the 4.26 CHANGELOG, where we will provide more details and strategies to upgrade your code as we get closer to the next release.

The following are deprecated from the public TypeScript definitions and will be removed in a future release.

The downloads for version 4.25 of the API and the SDK will be available on November 22nd. 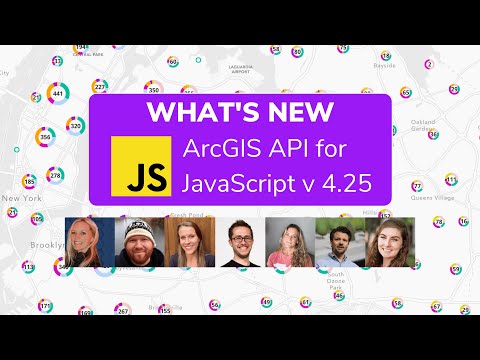