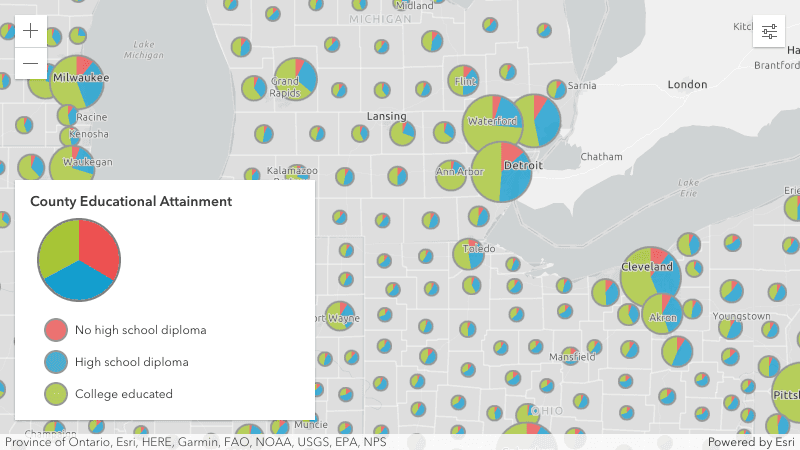 Binning (released in beta) is a new feature reduction method added as an alternative to clustering and heatmaps in 2D MapViews. Binning visualizations aggregate point data client-side by geohash cell based on a provided level of detail. You can define how you want to aggregate the numerical fields within each bin, and use them in the configuration of the bin's labels, popups, and rendering.

Server-side binning, which will allow you to display aggregates of very large datasets, will be added at a future release.

To learn more about binning, be sure to check out the following new samples: Intro to binning, Binning with aggregate fields, Binning - Filter by category, and Summarize binned data using Arcade

HeatmapRenderer now renders with WebGL, which means it can now take advantage of the following benefits:

HeatmapRenderer added a referenceScale property, which allows you to lock the heatmap visualization at a specific scale so it will appear consistent when zooming in and out.

See the images below to compare the differences between static and dynamic (default) heatmaps at various scales above and below the reference scale, or check out the Create a static heatmap sample to see it in action.

The HeatmapRenderer's underlying algorithm for calculating density was updated to use kernel density instead of Gaussian blur. This will improve consistency between heatmaps created in web apps when loaded in future versions of ArcGIS Pro. This update required the following updates to the HeatmapRenderer's properties:

Make your scenes more immersive by adding weather effects for rain and snowfall. Besides changing the cloud coverage, you can adjust the amount of precipitation or cover your 3D content in snow. Weather settings are now persisted in web scenes and slides, making it easier to author and share different scenarios.

Enhance your 3D visualizations with globally available 3D buildings and trees using new OpenStreetMap (OSM) layers from the ArcGIS Living Atlas. Explore the data using preformatted popup information and detailed 3D building models where available. Use the new layers as context in your scenes and apply spatial filters for areas where you want to place your own data.

Visit your favorite places in the new OSM buildings and trees scene: 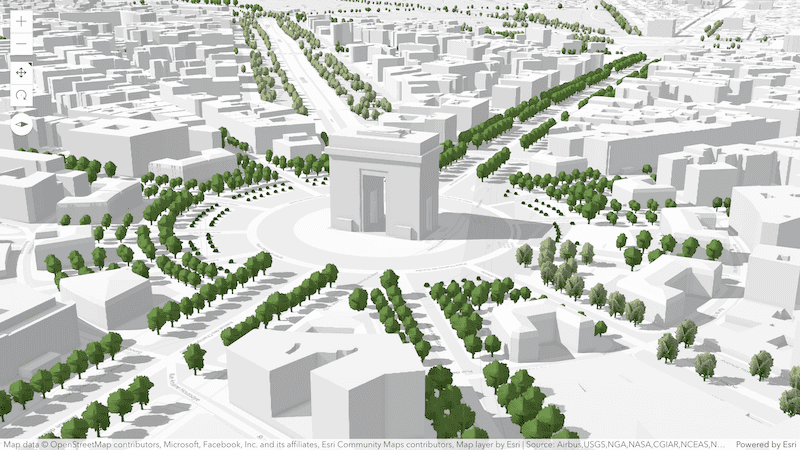 Change the appearance of your voxel data using previously published variables. Toggle between visualizing the variables as surfaces or using the full volume of the layer. In addition, a new class VoxelVolumeStyle allows you to exaggerate and offset the rendered voxels to better understand its spatial characteristics.

Try out these new rendering capabilities in a new voxel layer sample:

New tooltips and labels provide useful information when creating or updating existing features with the Sketch or Editor widgets. Labels indicate the length of Polygon and Polyline segments while tooltips show information about the overall geometry and tool in use. This can be total length for lines or area for polygons, as well as rotation, scale, and distance. Additionally, elevation is shown when editing absolute heights.

Try out these new capabilities using the Sketch in 3D sample:

Create new and aesthetically pleasing visualizations of the ground using blend modes in 3D. You can use the same blend modes already available in 2D to combine multiple tiled layers in your scene.

Check out a new sample that blends a hillshade layer over an OSM basemap to provide more contrast and spatial awareness. 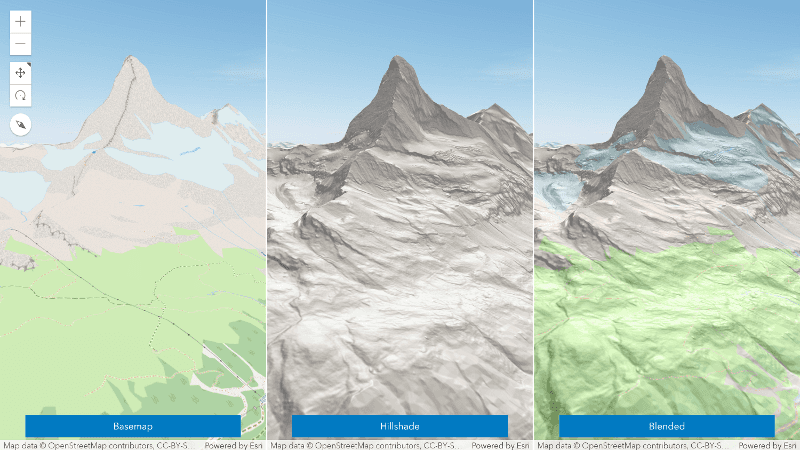 Explore your scenes by changing the lighting type directly in the Daylight widget. Instead of using a realistic sun position, minimize shadows and evenly light your scene by positioning the light source relative to the camera. Virtual light settings are now also persisted in web scenes and slides.

Try out the different lighting options in the updated Daylight widget sample:

Line of sight analyses can be persisted as a LineOfSightLayer in web scenes to share and present your analyses. LineOfSightLayer can be used as any other layer. For example, it can be visible or invisible per slide in a web scene. With a new interactive property on LineOfSightAnalysisView3D you can enable interacting with the analysis without creating a widget or view model.

Persist spatial- and object id based filters for SceneLayer, either through the web scene or layer item directly. Two different types of spatial relationships allow you to mask a selected area ("disjoint") or display only a selected area ("contains"), for example to evaluate different scenarios in urban planning. 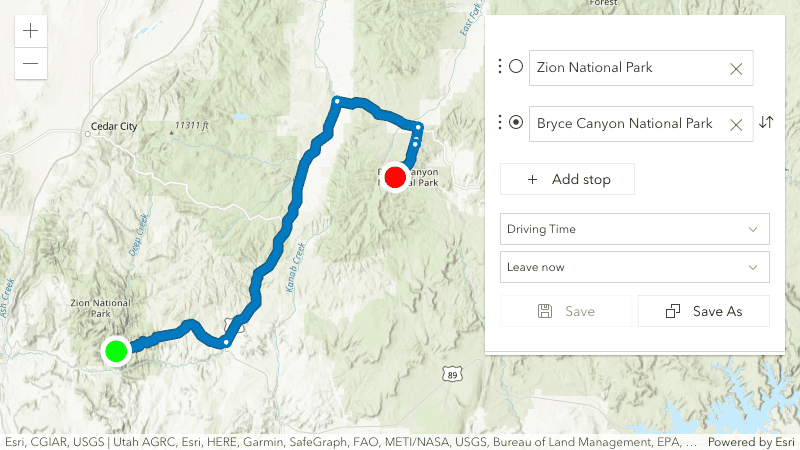 Arcade is an expression language that allows you to calculate values and create custom content in various profiles, such as popups, renderers, labels, and forms. Most of the time, the Arcade profiles that are part of the API are adequate for application requirements. However, sometimes developers need the ability to execute Arcade expressions in their own custom profiles. Starting at version 4.24, app developers now have the ability to compile and execute Arcade expressions in their own custom profiles. That means you can use Arcade where you want, how you want. In your custom profile, you get to define the valid data inputs, functions, and return types in addition to the context where expressions can execute.

This has been a highly requested feature since Arcade was first released. With the Arcade executor API, you will be able to do the following:

The following sample demonstrates how to execute an expression from a webmap and summarize the results in a chart. 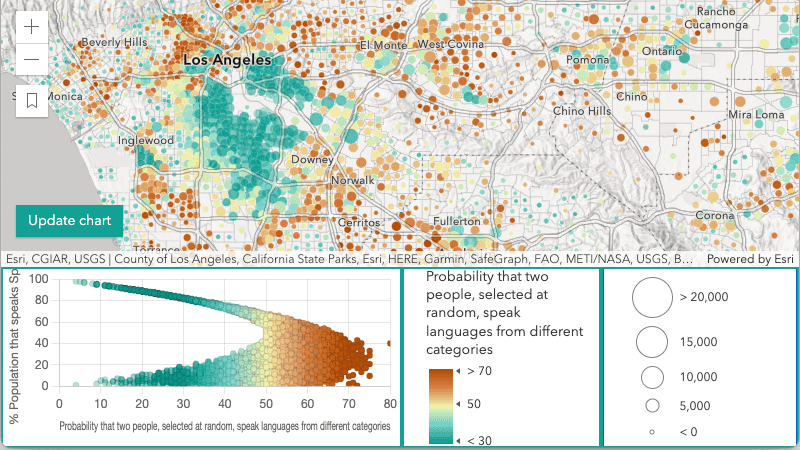 FeatureLayers can be saved to ArcGIS Online and ArcGIS Enterprise with the save() and saveAs() methods. This allows you to define a renderer with 2D symbology, popupTemplate, featureReduction, etc. on your feature layer and then save it to a PortalItem.

At this release, we made the following enhancements to CIMSymbol:

FlowRenderer - support for round caps

We added support for a trailCap property on FlowRenderer that allows you to change the starting cap of the streamlines. Round caps will only be applied to the renderer if the trailWidth is greater than 3 pts.

Charts within a popup's MediaContent now respect the renderer colors of the configured fields in the chart when visualizing data with predominance, dot density, or the new pie chart renderer. Fields represented by Arcade expressions are not supported at this time and are planned for a future release. 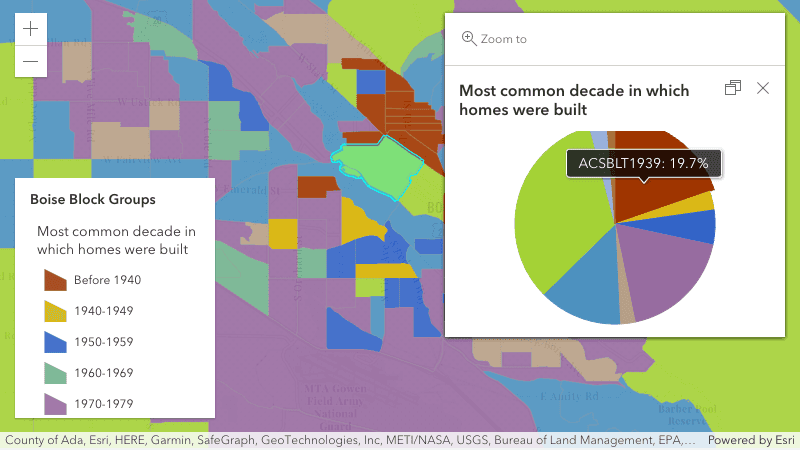 When hovering over items within the popup feature menu, the corresponding feature will automatically be highlighted in the map.

The FeatureTable widget has been updated to provide more extensibility for table and column configuration. New classes were added to allow this via template configurations. Similar to how popup and FeatureForm widgets use templates, the FeatureTable's template follows the same premise and provides the ability to configure individual columns, and starting at 4.24, grouped columns via their respective templates.

The Print widget now has an option to Include north arrow in the Advanced options. Note that the print service must have a north arrow configured on a per-layout basis for this option to be available.

Note that print also has a north arrow option when using the PrintTemplate.layoutOptions.elementOverrides property.

We also added a new property to ScaleRangeSlider.visibleElements, scaleMenus, that allows you to hide the scale dropdown menus from the widget's UI.

If a WebMap is configured with a default site (without a default facility or level), then the FloorFilter widget will display the list of facilities for that site instead of the list of sites.

If MapServer layers do not support the query operation, popups can now be opened using the identify operation if the layers support it. This can be checked with the MapImageLayer.capabilities.operations.supportsIdentify property.

WCSLayer has improved third party server compatibility, and is now out of beta.

Starting at version 4.24, the API uses WebGL2 where possible, otherwise falls back to WebGL1. WebGL2 support is integrated into modern browsers and provides improved support for the capabilities of modern GPUs.

If you are building custom WebGL layers, to take advantage of version-specific features or extensions your code will need to be updated to detect the context version, and to use the correct extension or native WebGL feature. Here is an example code snippet using the WebGL1-only extension WEBGL_color_buffer_float:

The following tasks have been deprecated for at least 3 releases and have now been removed from the API (expand to read more): 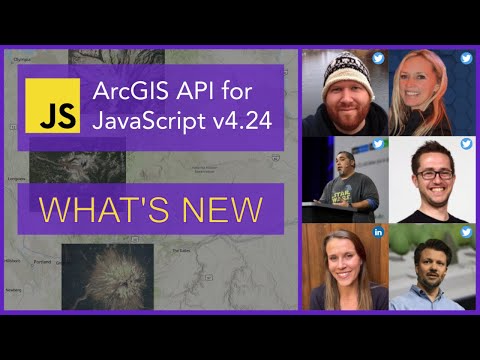