Make your scenes more realistic by adding weather. A new property on SceneView.environment allows you to configure a range of weather conditions from sunny to cloudy and even foggy. Adjust cloud cover, fog strength and time-of-day to enjoy a new atmosphere and weather visualizations at ground level.

Use this new sample to see San Francisco in different weather conditions.

Use patterns on lines or polygon outlines to symbolize additional information, for example to differentiate between planned and existing features. A new class LineStylePattern3D provides a variety of styles compatible with existing 2D capabilities. Patterns can be driven by attribute values and combined with visual variables.

Examples of different line patterns are used in the following hiking map sample.

A new sample visualizes sea water temperature in the Caribbean at various depths.

As part of our ongoing efforts to improve performance, we reduced memory usage up to 50% for applications with FeatureLayers using simple polygons and simple polygon outlines by streamlining how vertex data is encoded. This will help increase stability on resource-constrained devices such as phones and tablets.

Logic for calculating unique values, summary statistics, class breaks, and histogram in smart mapping for client-side layers moved from the main thread to workers. This prevents UI freezing and makes statistic calculations 6x faster than in previous versions of the API. This applies to statistic calculations in FeatureLayers created from client-side graphics, CSVLayer, GeoJSONLayer, WFSLayer, OGCFeatureLayer, and any service-based FeatureLayer using an Arcade expression in its renderer.

In the animation below, note the UX improvement in the ArcGIS Online Map Viewer as it generates statistics for histograms and class breaks much faster when using version 4.22 of the API than version 4.21.

The Legend widget now supports layer effects in operational layers. It does not support FeatureEffect. Compare the following images showing the Legend for a layer that has the invert effect applied. In 4.22, the Legend much more accurately depicts what is rendered on the map.

We added 167 colorblind-friendly color ramps to the Smart Mapping color APIs. These ramps include dozens of newly designed above-and-below ramps that emphasize middle values in addition to the values above and below the critical middle value. Traditionally, above and below color ramps use neutral hues that blend in with the basemap for the middle values, making it difficult to see those features. There are many scenarios where that is desirable (i.e. where the important values are further from the center). However, making the middle values more obvious can help users to easily see the locations of all data points, especially when middle values are important to highlight in addition to the extremes.

These new color ramps can be accessed in the following ways:

We added a new chapter to the Visualization guide called High density data. This chapter demonstrates seven effective ways you can visualize data with overlapping features. Covered topics include the following:

Trace how resources flow through a utility network

See the images below to compare how the upgraded polyline labeling looks:

Only show popup for visible features

As of version 4.22, the popup only displays for features visible in the map. If there is a filter applied, only the features that pass the filter will return a popup. We will continue to improve popup behaviors in coming releases.

Defining dynamic popup content in Arcade expressions as opposed to JavaScript means you can save the popup template in a webmap and load it in other ArcGIS apps, providing a consistent user experience for the same webmap. This feature is especially useful in layers representing aggregated data.

Prior to this release, if you wanted to create a chart from values returned from an Arcade expression, you would have to write a separate expression for each data point in the chart's media infos. With this change, you can create multiple charts with a single expression, allowing you to write more efficient code. Creating charts with ExpressionContent also allows popup content to render 3-4 times faster than when using multiple expressions in a MediaContent element. The increased performance improvement depends on the number and complexity of expressions you would have had to use in a MediaContent element.

Check out these examples of how to use Arcade to create popup content elements.

Attachment content within Popups now uses auto as the default displayType instead of list. If the feature layer's capabilities support resizing attachments, the content will display in preview mode. If not, it will revert to displaying the attachment as a list.

The images below show the same popup attachment. Take note that the 4.22 version displays as preview since the layer supports resizing attachments.

We improved how overlapping polygon features are displayed in the map. Previously, polygon outlines were rendered after polygon fills, causing the outlines to display on top. This made it difficult to differentiate boundaries for overlapping polygons. At 4.22, we now render solid outlines and fills simultaneously for each polygon in the order that each feature is displayed in the map.

Support for feature ordering in WFSLayer

We've added the following enhancements and improvements to CSVLayer and GeoJSONLayer.

At this release, we added time support for ImageryTileLayer and WCSLayer. 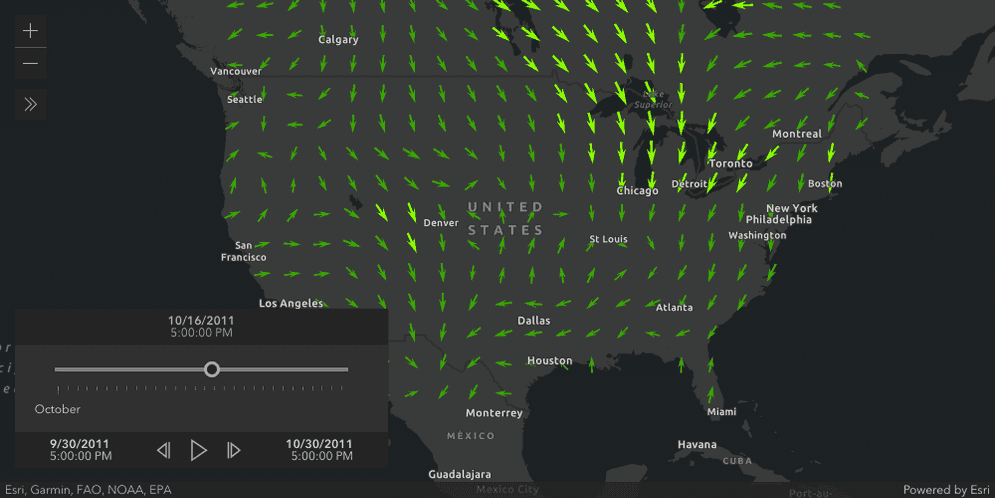 For imagery centric workflows that use image coordinate systems, we added computeAngles() and computePixelSpaceLocations() methods on ImageryLayer and imageService. These methods can help imagery analysts know the corresponding up and north angles and the pixel space locations for image coordinates.

We've added the following optimizations and improvements for working with refreshable layers — layers that update their data at a specified interval. A layer is refreshable if it has a refreshInterval property.

Using Sketch and SketchViewModel, you can select and move point graphics in the map by clicking anywhere on the symbol. Previously, it was only possible to move a point graphic directly from the location of the point geometry. These changes are specifically for CIMSymbol, PictureMarkerSymbol, and TextSymbol.

TimeSlider - get properties from WebMap

TimeSlider.getPropertiesFromWebMap() allows you to easily configure your TimeSlider based on settings saved in a WebMap.

By default, the map extent is now preserved instead of the map scale in the printout. This allows you to print all the features in the current view. To preserve the scale instead, use the TemplateOptions.scaleEnabled property.

Lastly, the Print widget and print support printing layers with non-standard URLs (e.g. no MapServer, FeatureServer, or ImageServer in the URL) by sending a layerType property in the print request. However, this requires a print service from ArcGIS Server 10.9.1 or later.

When the scale of the MapView or SceneView is less than or equal to 300,000, the Search widget supports prioritization of candidates based on their distance from the center of the view by passing in the location parameter. This default behavior can now be changed by using the localSearchDisabled property.

We added featureEffect to CSVLayer, GeoJSONLayer, FeatureLayer, OGCFeatureLayer and WFSLayer, which allows you to draw attention to features of interest. The corresponding layerViews of those layers also support the featureEffect property, and it should be used in place of effect. Feature effects that are set on layers can be persisted in a WebMap. 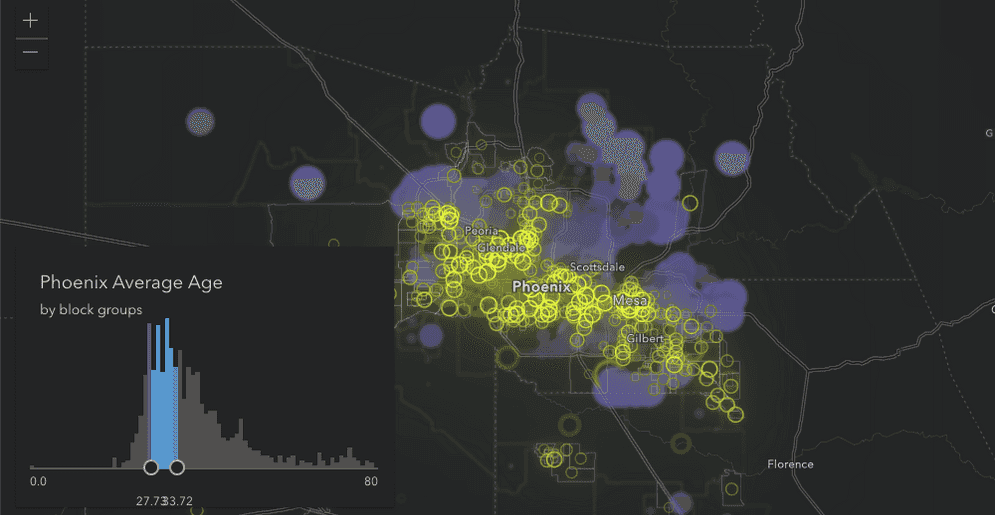 It is no longer necessary to set Dojo's "csp-restrictions" has flag to true when CSP support is needed. Although this flag is no longer necessary, please be aware that there are still limitations when using the JavaScript API with CSP. Please refer to our FAQ section for additional information regarding this.