WebGL enabled by default in 2D

WebGL is now the default drawing mechanism for FeatureLayer, CSVLayer, and StreamLayer in MapView after having been in beta for a few releases. This includes support for all versions of ArcGIS Enterprise and ArcGIS Online as well as feature collections.

Rendering graphics in WebGL has resulted in the far more rapid display of both small and large datasets. The number of features that can be displayed, while still maintaining a high level of performance, went from tens of thousands to hundreds of thousands. WebGL rendering has become the primary way in which the API renders graphics due to the clear superiority of rendering with WebGL versus SVG (the legacy rendering mechanism) and broad browser support. This expanded usage will be evident in 4.9 and even more so in 4.10.

In both MapView and SceneView you can navigate with gamepad or 3Dconnexion devices. You can use them to intuitively view and explore maps and scenes. Try it out in any of the samples in the Sample Code section. All Standard Gamepads as well as 3Dconnexion devices are supported. For a list of browsers and operating systems that are compatible with these devices, see the GamepadInputDevice documentation. 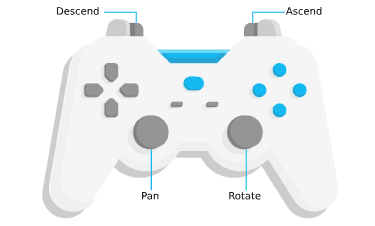 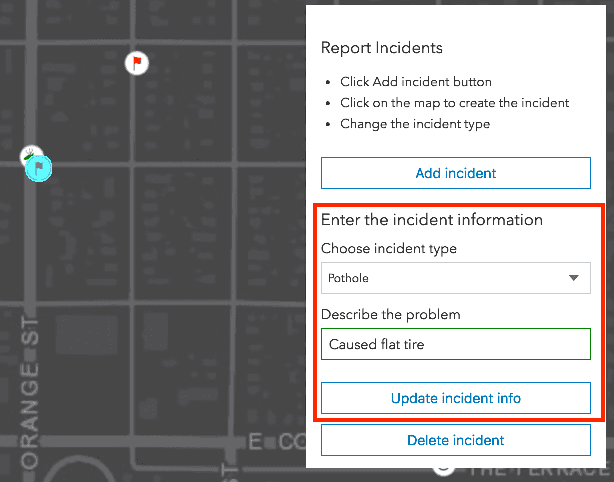 To see this widget in action, see this sample.

Currently, the widget is still in its beta version. It does not yet have full parity to the functionality provided in the 3.x AttributeInspector widget. Additional functionality is scheduled in subsequent releases.

Highlight support is now available when using the Search widget on a SceneView. If the LayerView supports highlight, the widget will work with the layer's returned feature and highlight it. For those layer views that do not support highlight, a graphic will be added to the View's graphics collection.

Take a screenshot of the SceneView

Using SceneView.takeScreenshot() you can now create a screenshot of the view and export it as an image. Different options like image format, quality, aspect ratio or image size can be specified. See the Take a screenshot of a SceneView sample to learn more about this feature.

Predominance allows you to color a layer’s features based on which attribute among a set of competing numeric attributes wins or beats the others in total count. Common applications of this include visualizing election results, survey results, and demographic majorities. All you need to do is specify the layer, view, and a set of numeric fields. 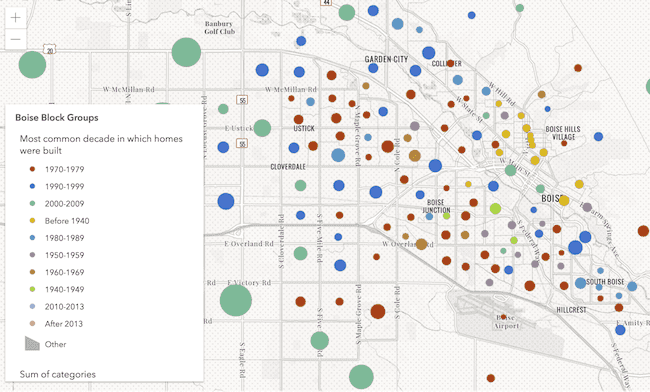 Relationship renderers (also known as bivariate choropleth visualizations) allow you to explore the relationship of two numeric fields using color. While this is normally a complicated visualization to create, this convenient method only requires you provide a layer, view, and the names of two numeric attributes, and the renderer will be generated for you. 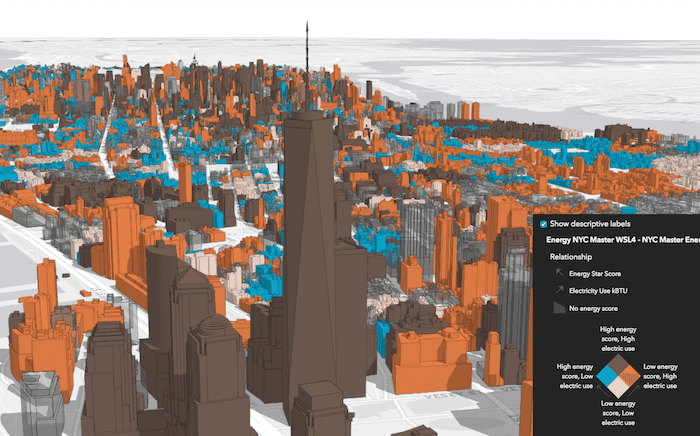 Age renderer creators require one or two date fields in either the color or size smart mapping module. These methods will generate a renderer based on the age of the features as determined by the date field(s).

CORS support has been enhanced in version 4.9. A primary reason behind this is due to WebGL becoming the primary way in how the API handles working with graphics. Because of this, we have optimized the way in which we approach working with CORS.

Beginning in version 4.9, the API expects web servers will support CORS. If this is not the case, you can still configure your application to reference a proxy file as an alternative to working with a server configured for CORS. For additional information on what specifically changed between versions, please refer to the CORS and the ArcGIS Maps SDK for JavaScript: Changes coming in 4.9 blog article written specifically to address this update.

We have further enhanced esri/request by adding an optional signal property as part of the RequestOptions. esri/request can now accept and handle an AbortSignal. This also applies to every class that accepts requestOptions. For browsers that do not support AbortSignal, you can use the AbortController shim.

This new cancellation mechanism will progressively be integrated with each cancelable asynchronous API to become the default way to cancel them. For more information, please refer to Abortable fetch.

The behavior described below was specific only to version 4.8.

If you developed using http://localhost, it was automatically flagged as being in a secured network. For example, while running an application from http://localhost which accessed unsecured (http) resources, the API would automatically update those requests to use https. Although it is still a better practice to use https, some development configurations may not have it set up. These configurations no longer have to worry about the URL getting upgraded automatically.

The BasemapGallery widget now disables incompatible basemaps in 2D, the same way as they were always treated in 3D.

It is now possible to add, remove, and update vertices on existing polyline and polygon graphics using SketchViewModel. This functionality is currently not available on touch devices. Beginning at version 4.10, support for this functionality will be enabled on touch devices and will have public API. It is also possible to do undo and redo operations while updating existing polyline and polygon graphics.

A new sample was added showing how to work with the Feature widget.

We updated the Search widget and SearchViewModel API documentation to help keep things easier to navigate. Instead of having all of the sources written out as type definitions, we broke them out to separate classes. These classes are FeatureLayerSearchSource and LocatorSearchSource, both are inherited from SearchSource.