Electronic navigational charts (ENCs) are georeferenced vector datasets for the visualization and analysis of hydrographic and maritime information. ENCs that conform to the International Hydrographic Organization (IHO) S-57 standard are supported. 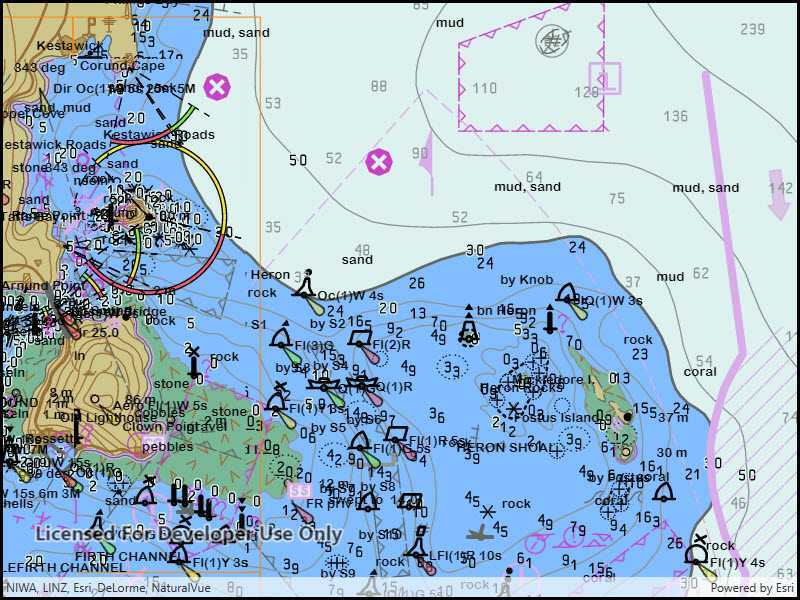 Use ENCs in your apps to:

ENCDataset objects represent datasets. Each ENCDataset contains the base data for a cell and any updates that were also loaded when the exchange set was loaded, and provides access to metadata about the cell. Retrieve a collection of ENCDataset objects contained in an ENCExchangeSet using the datasets property.

ENC cells (individual charts) are represented by ENCCell objects. You can construct these objects in two ways:

Display an ENC cell by constructing an ENCLayer object from an ENCCell object. ENCLayer is derived from Layer, so you add an ENCLayer to a map like you do other layers.

ENC layers are displayed in accordance with the IHO S-52 standard. You can define the display properties of your ENC layers by using the static ENCEnvironmentSettings class. These settings apply to all ENC layers in all maps. Settings fall under three categories: mariner settings, text group visibility settings, and viewing group settings. Text group settings control the display of labels for features, mariner settings control the symbolization and presentation of ENC features, and viewing group settings allow for quickly applying settings to logical groups of feature types.

ENC content is accessed via compiled SENC files. SENC is an acronym for System Electronic Navigational Chart. After an ENC cell has been loaded, all future loads of that cell will reference the underlying SENC file directly. You can use the environment settings to find or set the location where SENC files are stored.

ENC layers support identify through the common geoview feature identification mechanism, which takes a screen point and tolerance in pixels. Identify will return a collection of result objects, one per matching layer. For ENC layers, the results will have a geoElements property, which provides a collection of ENCFeature objects.

Once a feature has been identified, you can call select() on the layer that contains the feature to select it.