Several options were added to the API improving the visualization of point data in city scenes. This is particularly apparent when visualizing points of interest in a city. These new options include:

To see how to create city scenes with easily readable point information, see the Point styles for cities sample.

These new styles were developed to be used for points in cities, but are not limited to that. In the Using callout lines with labels sample, you can learn how to use them for displaying mountain peaks:

The highlight() method was added to FeatureLayerView and SceneLayerView allowing you to select, or highlight, features so they are prominent in the view. You can also customize the color and opacity of the highlight symbol with the highlightOptions property.

This feature is only supported in 3D. Support in 2D will be added in another release.

See the following new samples demonstrating how to highlight features: 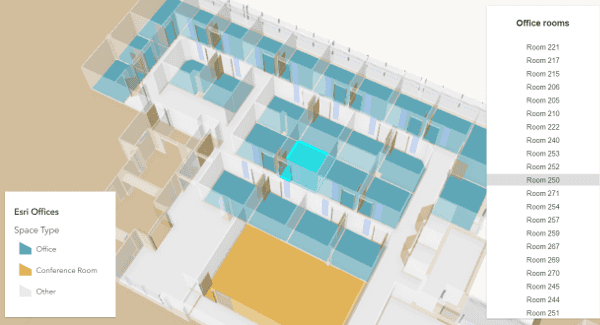 Values returned from Arcade expressions can be referenced within the content property of a PopupTemplate. This is supported as part of the new popup Arcade profile. Similar to the visualization profile, this is useful for situations when you want to display data that isn't present as an attribute value in your FeatureLayer instance.

In the snippet above, values from the CIVLBFR_CY and POP_16UP fields are used to calculate the labor force participation rate for each county. The PopupTemplate defined above would yield the following result when the Greenlee, AZ feature is clicked.

See the following resources related to Arcade and popups that are new to 4.4: 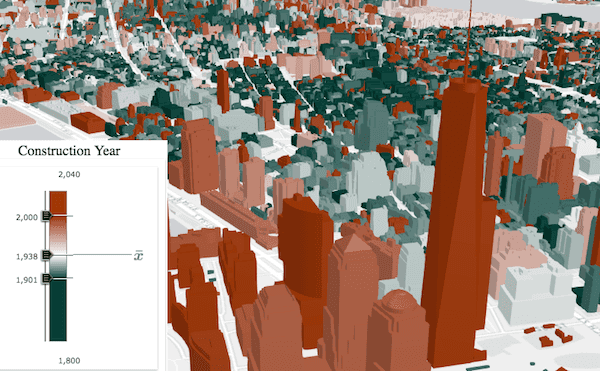 The following are new modules at 4.4 associated with the Smart Mapping APIs:

The new typeRendererCreator object allows you to generate a UniqueValueRenderer for a given field with a color scheme suited well for the given basemap. See the Generate data-driven visualization of unique values sample for an example of how this works. 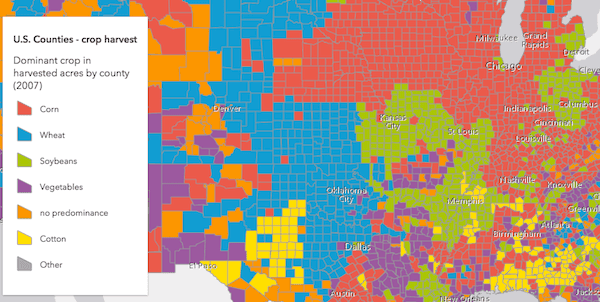 These API updates introduce breaking changes. The SteamLayer sample was updated to reflect these updates.

This release of the JavaScript API adds support for printing VectorTileLayers. Please see the PrintTask document for additional details.

We added the colorMixMode property on the material of a MeshSymbol3D to make it easier for the user to style buildings with textures. Buildings may be visualized by colorizing textures or by defining a color to replace the textures. 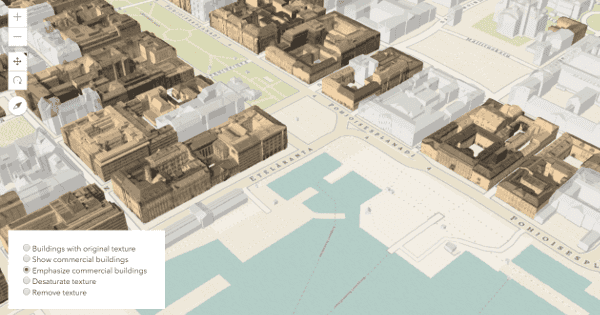 The PointCloudUniqueValueRenderer (added at 4.3) allows you to distinguish different types of objects depicted in the point cloud, such as houses, streets, vegetation, etc. At 4.4, you can set the colorModulation property on PointCloudUniqueValueRenderer, which uses the Intensity field to add natural lighting conditions. This helps distinguish the actual appearance of the objects, which was more difficult for layers that applied this renderer at 4.3.

As a comparison, the left-hand scene uses colorModulation whereas the right does not.

See how to use this property in the PointCloudLayer - intensity color modulation sample.

We added support for rotation around all axes of the ObjectSymbol3DLayer so that you can better place 3D symbols in the scene.

At 4.4, createActionsFunction was deprecated and replaced with listItemCreatedFunction. With this new LayerList property you can modify any writable property of each ListItem used in your LayerList instance. This gives you more flexibility in customizing the LayerList widget. For example, now you can set the visibility, title, and actions for a list item instead of being restricted to only defining the actions. You also have direct access to the item's associated layer, and can modify its properties if needed.

The LayerList widget with actions sample has been modified to follow this updated pattern.

Prior to 4.4, you defined actions with a function passed to the createActionsFunction property. However, this function only set actions and couldn't modify other list item properties.

In this release, the following widgets have been updated to the widget framework, initially introduced at 4.2:Legend, Popup, and Search.

MapImageLayer added support for displaying images with higher definition in hi-dpi devices. See the images below for a comparison between an image exported from a map service in 4.3 versus 4.4 as viewed on a retina display.

While the ArcGIS Maps SDK for JavaScript provides many useful predefined layer types, they may not satisfy the needs of specific applications. Now users can extend any of the classes mentioned above to create custom layers, which is useful when you need to: 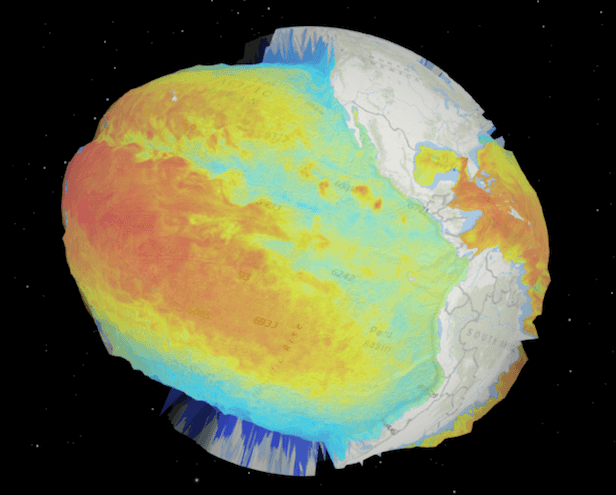 We added the following samples to demonstrate the basic fundamentals of creating custom layers:

Writing a custom layer enables you to support the drawing of new data formats. Before you get started on creating custom layers, it is helpful to have some familiarity with the following topics: