We increased our capabilities to visualize temporal data in both 2D MapViews and 3D SceneViews. We added the TimeInterval class to describe a length of time in different temporal units, which is referenced by time-aware layers and the TimeSlider widget.

The beta version of the TimeSlider widget simplifies time manipulation in your application, and can be configured to update the View's timeExtent, which means all time aware layers will update their contents to conform to this change. You can also use TimeSlider widget to visualize temporal data on the client-side by setting filters or effects on FeatureLayerView, CSVLayerView, and GeoJSONLayerView.

We will continue to add more support for time-awareness. This includes, but is not limited to, adding timeExtent properties on layers that store temporal data, allowing layers to follow their own timeline without having to follow View.timeExtent, and continued improvements and enhancements to the TimeSlider widget.

See the TimeSlider widget sample and the Filter features with TimeSlider sample for examples.

Vector tile layers now load 50% faster due to improved vector tile fetching including more parallelization of requests, and tile processing optimizations. Feature layer rendering improved due to optimizations related to triangulation of geometries. Triangulation processing improved without reducing quality. Load time of 2D maps has been reduced thanks to revamped tessellators. This improves the speed, accuracy and memory profile of the core algorithms. We also added adaptive switching strategies to select the most appropriate for a given situation.

Drawing improvements include faster processing of data values in visualizations so they can be updated more rapidly, providing a better user experience and improved performance. FeatureLayer updates are faster when changing the variable driving the visualization. The animation below showcases the change between 4.11 and 4.12.

Scene layer performance continues to improve: 3D objects SceneLayer and IntegratedMeshLayer load and display on average twice as fast using the new I3S specification version 1.7. In addition, a new client-side caching helps reduce areas without data when exploring a 3D scene. To experience this increased performance you can convert your existing SLPKs with the I3S Converter tool. For more details read the Working with scene layers guide topic.

We made several updates to modernize the API. These updates allow us to take more advantage of APIs available natively in modern web browsers.

The SceneLayerView and FeatureLayerView now support pure client-side queries that don't require a round trip to the server. Interactively select features and display statistics using spatial- and attribute-based expressions. A new sample shows how you can query a SceneLayerView for statistics on the features that match the query.

Add animated water visualizations to your 3D scenes using the new WaterSymbol3DLayer. Whether looking at an ocean from far away or a lake close-up, the new water polygon style allows you to create realistic views, such as sunlight reflections off the water.

We added support for 2D WebStyleSymbols. This adds over 100 high quality symbols that are available to use in 2D MapViews. See Esri Web Style Symbol (2D) guide page for supported symbols hosted by Esri. These symbols are based on CIM (Cartographic Information Model). The CIMSymbol class allows users to create symbols that are composed of multiple SymbolLayers with many customizable visualization options available to the user. See the WebStyleSymbol (2D) sample and the CIMSymbol sample for examples.

New 3D models in the Esri Web Style Symbol (3D), such as bicycles and fire hydrants, allow you to further customize your scenes. Additionally, Infrastructure and Recreation web styles were added to the gallery. We also added an automatic level of detail to Schematic Trees to maintain strong performance in scenes with a large number of trees.

The following scale enhancements only apply to renderers in 2D MapViews.

Outline size by scale - The outlineOptimizationEnabled parameter was added to all renderer creator methods for polygon layers. When set to true, the generated renderer will include symbol outlines that dynamically their change width by view scale.

Size range by scale - The sizeOptimizationEnabled parameter was added to the following renderer creator methods for polygon layers. When set to true, the sizes of generated icons will dynamically change based on the view scale. Internally, this option uses the new sizeRange function to determine the appropriate size range by scale. This only applies to data-driven visualizations involving size visual variables.

Suggested layer visibility by scale - The scaleRange function was added as a convenience for suggesting the min and max scale ranges for any layer in a given view.

The dotDensityRendererCreator.createRenderer() method was added to the new dotDensity smart mapping module. This is a helper method for generating a DotDensityRenderer with a suggested dotValue appropriate for the scale of the view where the renderer will be displayed. This is intended exclusively for visualization authoring apps and data exploration applications. 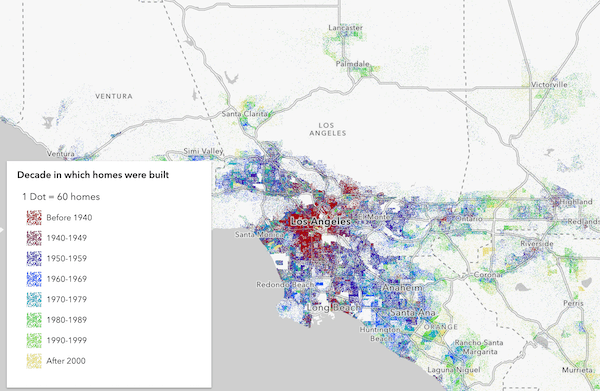 3D support for lines and polygons

The following widgets are removed from the JS API at version 4.12 in favor of their counterparts above:

We added tags and names to all smart mapping color schemes and provided methods for querying schemes by tags and names. This makes it easier to work with color ramps available via the smart mapping APIs for renderer authoring applications. All symbology modules now have getSchemeByName(), getSchemesByTag(), and getThemes() methods.

The new square profile on PathSymbol3DLayer, allows you to visualize 3D lines with square, strips and walls styles. As with other symbols this new profile also supports attribute driven size or color using VisualVariables.

Combine the path profiles with the new configuration options for cap, join and profileRotation to enhance the visualization style for line features such as streets or geographical boundaries. You can try out these new properties in the Path visualization in 3D sample. 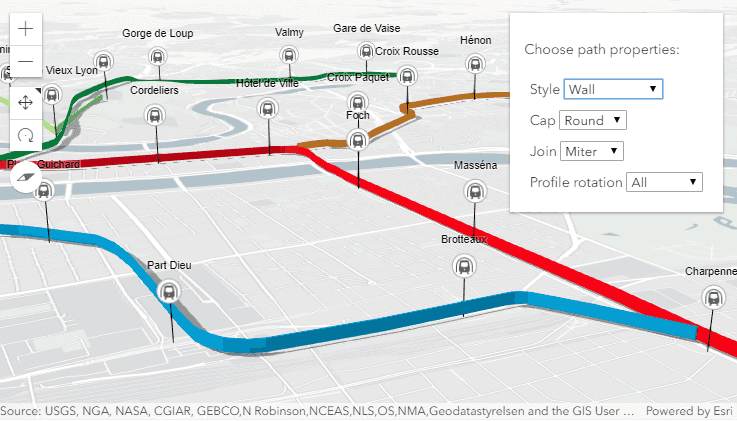 The BuildingSceneLayer allows you to render detailed 3D building models. With this release we added support for filters, so that you can create applications that isolate floors, highlight building materials or visualize construction phases. Define a BuildingFilter on the filters property of the BuildingSceneLayer and it automatically applies to allsublayers.

Most asynchronous methods in the API now support an optional signal parameter of type AbortSignal. This allows for cancellable requests. If aborted, the promise is rejected with an error named AbortError. See also AbortController. To know if an asynchronous method supports signal, look at the methods parameters in the API reference.

Here is an example where we pass the controller's signal to the queryFeatures method. If the request returns an error with the name AbortError, then we print a useful error message in the console.

We added a new class, esri/geometry/support/geodesicUtils, that performs geodetic computations for Earth and non-Earth spheroids. This class has some methods that are similar to geometryEngine methods. Reference the table below to compare the functionality available in each class.

We added support for CSS names for font.family property values for FeatureLayer, CSVLayer, and StreamLayer in 2D MapViews. For example, we now recommend using Old Standard TT instead of old-standard-tt. However, the old naming convention will still work. For more information and examples, please refer to Fonts for FeatureLayer, CSVLayer, and StreamLayer.

Multiple updates were made to streamline date and number formatting functionality. Date formatting is now better at recognizing regional differences. Prior to this version, the order of date components always followed US English (en-US) rules, e.g. Monday, June 24, 2019, 2:28 PM (Day of the week, Month Day, Year, time in 12 hours cycle). In addition, a new esri/intl class was added which provides helper methods used for formatting dates, numbers, and template strings.

With these updates, there comes a couple notable breaking changes. These changes pertain to out-of-the-box function formatters, i.e. DateString, DateFormat, and NumberFormat, as they are no longer supported with the PopupTemplate.content. Instead, set it via the FieldInfo's fieldInfoFormat. Another change is that the PopupTemplate's content can no longer be set using a wildcard, e.g. *. Instead, set the Popup's defaultPopupTemplateEnabled property to true.

The following widgets are new at version 4.12:

esri/widgets/Slider - A generic slider that can be used for gathering any kind of user input involving numbers or a range of values.

esri/widgets/TimeSlider - A slider that can be used to manipulate time visualization in your application.

esri/widgets/HistogramRangeSlider - A slider that renders a histogram along the range for gathering user input involving a range of data values. 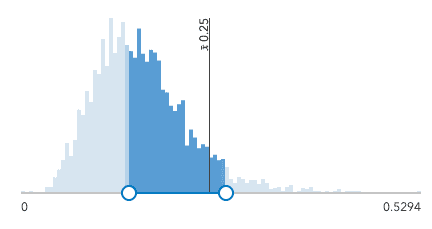 esri/widgets/Histogram - Renders a histogram that can be customized with styles and interactions for exploring data. 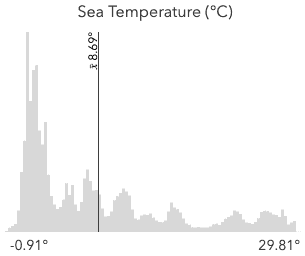