Point clustering is now a supported method of feature reduction on FeatureLayer, CSVLayer, and GeoJSONLayer in 2D MapViews. See Clustering styles and configurations for more information about the various ways clusters can summarize the points they represent. You can configure additional options for clustering, including clusterRadius and popupTemplate.

Note that clustering is currently not supported in 3D SceneViews, and there are some differences between the 3.x ArcGIS API for JavaScript and the 4.x implementations of clustering. 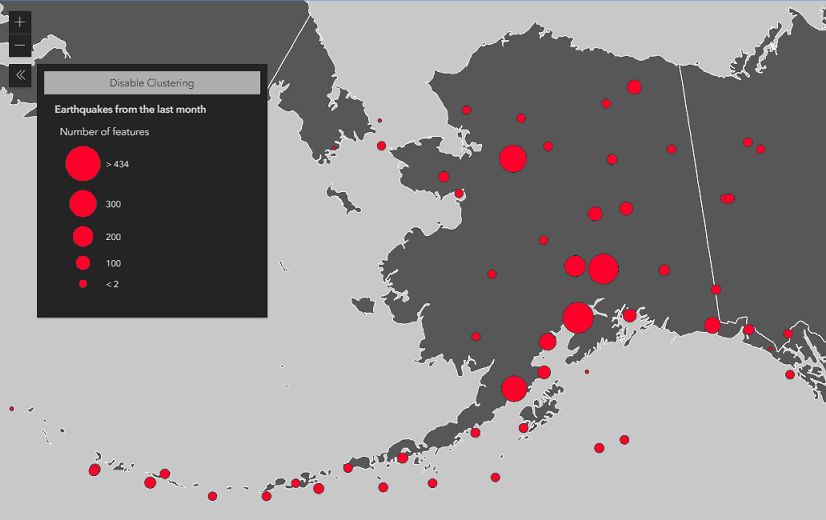 You can add, update, and delete attachments with the FeatureLayer.applyEdits() method. There is also an options object that can be passed to the applyEdits() method, which contains gdbVersion, rollbackOnFailureEnabled, and globalIdUsed properties.

Use the new Line of Sight widget to analyze visibility in your scene. Place two or more points on buildings, ground and other scene objects to evaluate direct line visibility. Analysis results update interactively as you move the observer or targets within your scene. With the new widget you can for example evaluate the impact of planed construction on the surrounding buildings.

Use the new Daylight widget to change the time and date of your scene interactively. This setting determines the sun position, light intensity and shadows casted by 3D objects in your scene. The widget also allows you to animate the sunlight throughout the day.

SceneLayers that show 3D objects now support labels. Based on the attributes in the Scene Layer cache, you can now use the labelingInfo property, for example to annotate buildings of public interest by name. 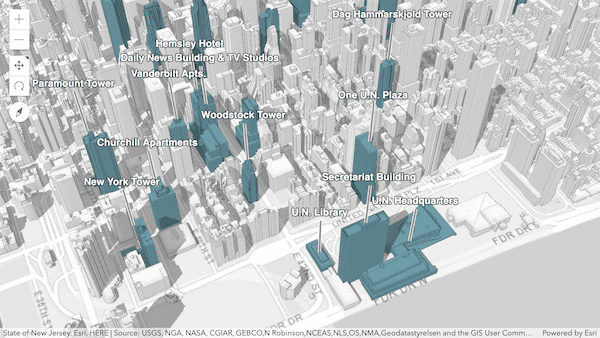 For maps that are embedded in another page, three new properties were added to view.navigation that provide an easy way to enable or disable panning and zooming: browserTouchPanEnabled and mouseWheelZoomEnabled. These properties can be enabled or disabled to significantly improve user experience when single-finger touch panning or when using mouse-wheel scrolling. In the next release this experience will be made even easier to implement for developers.

All the color ramps used in the Smart Mapping symbology APIs can now be easily viewed, filtered, and copied to your apps in a guide page: Esri Color Ramps. This guide, together with the new Visualization best practices guide, provides easy access to more than 300 color ramps designed by color experts. They are categorized to help you make smart decisions when choosing colors for renderers and charts.

We also added an API for querying any of these ramps by tag and by name.

As part of performance optimizations, the API no longer simplifies geometries before they are added to view.graphics, GraphicsLayer, or feature collections added to the FeatureLayer.source. It is the developer's responsibility to check the correctness of polygon geometries before they are added to those layers. You can use the geometryEngine.simplify() method to make sure that polygons display correctly client-side. Note that the FeatureLayer.applyEdits() method automatically simplifies polygon geometries.

All Smart Mapping renderer creator methods added a sizeOptimizationEnabled parameter. When this parameter is true, the generated renderer will contain a Size Variable to control symbol sizes by scale. This applies only to layers rendered in a MapView.

When a SimpleRenderer is used to visualize all features in a layer with the same symbol, that symbol size may vary by scale to improve readability of the map across all scales. The visualization below was generated by setting sizeOptimizationEnabled to true in the locationRendererCreator.createRenderer() method.

The sizes defined in size range visualization can now be generated for several scale levels. This was previously supported for polygon layers, but now includes points and polyline geometries. The images below show a layer rendered at different scale levels with the same renderer. This visualization was generated using sizeRendererCreator.createContinuousRenderer().

The Sketch widget by default will continue to create graphics with the same geometry type until the user chooses another tool on the widget. You can change this behavior by setting the sketch's creationMode property. You can also specify how users can create graphics by setting its defaultCreateOptions. By default, users can click or drag the pointer to create vertices. We also added delete() method which will emit a delete event.

The Projection Engine includes several new projections, such as the Spilhaus world ocean map in a square or "Spilhaus projection" (WKID 54099). 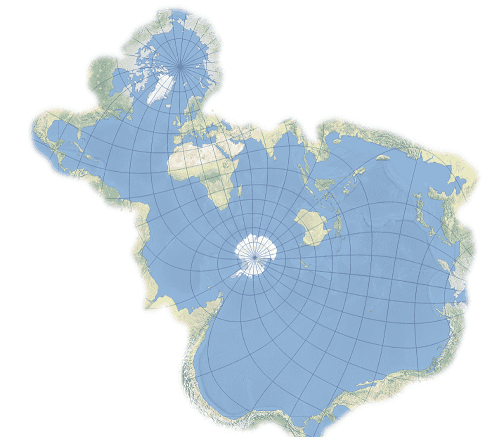 We are planning to make the API return native Promise by default at 4.15, then completely remove Dojo promise at 4.16. A has flag was made available to enable native JavaScript promises in 4.12 to enable this behavior. More details about this functionality will be available in an upcoming blog post.

We tackled more preparatory work to remove the dependency on Dojo's declare module. The classes from the ArcGIS API for JavaScript are built using dojo/_base/declare. We are migrating to leverage the JavaScript (and TypeScript) class system only. The first step of this migration is to stop using multiple inheritance and adopt the mixin pattern. We added a warning message in the browser console to help remind you about this change. See the updated guide page about Implementing Accessor for more details.