Editing of point, line and polygon features is now supported in 3D. Update and persist FeatureLayers in your scene using out-of-the-box workflows from the Editor widget. This allows you to build end-to-end editing experiences for creating and updating features in your 3D web application.

While the Sketch tool already supports features on the ground, the new z-aware editing tools also allow you to modify geometries above- and underground. Laser lines projected onto the terrain and objects in the scene help you align geometries in the 3D space.

When you scale or rotate 3D symbols with the interactive handles of the 3D point transform tool, the feature attributes are automatically updated through VisualVariable configurations. Existing widgets such as the FeatureForm and FeatureTemplates integrate with 3D symbology.

See the new Edit features in 3D with the Editor widget sample for example workflows.

The FeatureTable widget provides an interactive tabular view of each feature's attributes. The table efficiently loads larger datasets quickly. This can be noticed as the user scrolls through the table. In addition, users can select rows (features) within the table, sort them based on an attribute, and choose to show/hide an attribute column. This widget is still in its beta version and will evolve with upcoming releases. For a complete list of its current limitations, please visit its API reference documentation.

The FeatureTable widget can work on its own as a standalone widget. 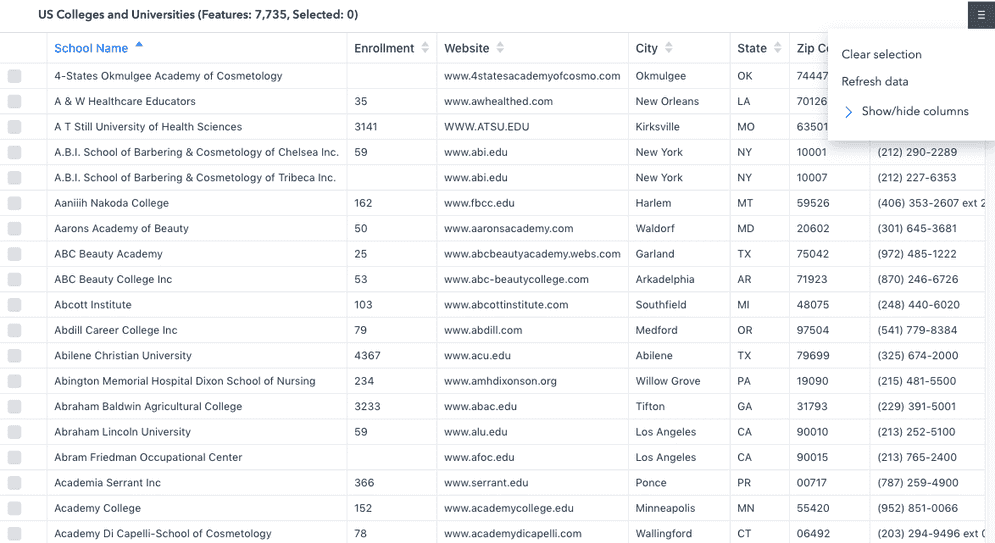 It can also work in conjunction with an associated map. 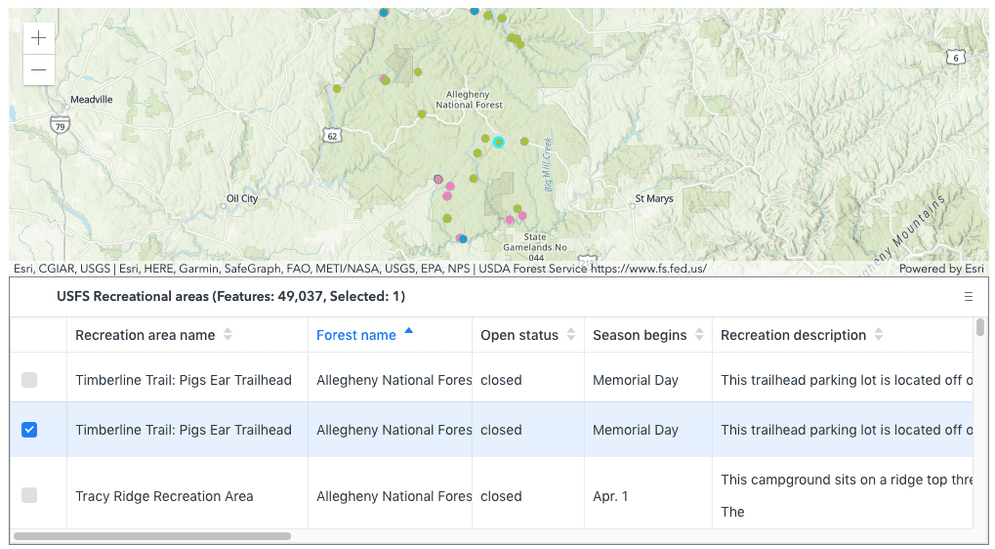 The Editor widget was updated to support attachment editing. You can add, update, or delete attachments associated with a feature. It does so by making use of the Attachments widget. Nothing specific needs to be explicitly configured within the Editor to make this work. If the feature service to be edited is enabled with attachments, the option to add, update, and delete them will be made available within the widget.

New filter modes in the BuildingSceneLayer allow you to highlight features in a BIM model while still showing other parts of the building. Possible filter modes are x-ray for transparency and wire-frame to only show the edges of features. 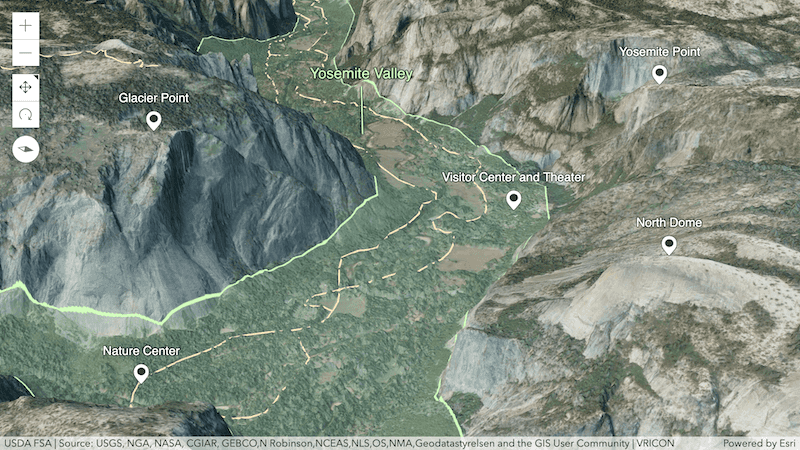 See the IntegratedMeshLayer sample for an example.

Custom 3D models created with the Mesh geometry class can now benefit from a new MeshMaterialMetallicRoughness material, rendering them with a specular surface. You can tweak the metallic and roughness factors directly on the material or through texture maps.

You can see the difference in the above 3D terrain showing Mammoth Mountain. Try out different material properties in the Low poly terrain using mesh geometry sample.

We made two significant updates to the API to modernize and strengthen it.

esriConfig as a global variable

The esriConfig object can now be used as a global variable to set esri/config properties.

The API returns native Promise by default as of 4.15. This will require code changes in your app. We plan to completely remove Dojo promise at 4.16. For app developers, this means that any promise you receive from the API is now a standard JavaScript promise (aka "native promise"). They are nearly identical to Dojo deferred/promise, with the following differences:

A has flag was made available to enable native JavaScript promises in 4.12. Now it can also be used to disable native Promise, but this flag will be removed in the next release. More details about this functionality will be available in an upcoming blog post.

We continued our work of removing the dependency on Dojo’s declare module. At the next release, this module will be removed completely. This means that apps with classes that leverage the API class framework and multiple inheritance will continue to work with version 4.15, but will stop working at version 4.16. There is a warning message (with a link to the Accessor guide page) in the browser console when multiple inheritance is used:

Once the work is completed, you can test your apps using the early API access repo on GitHub (/next) to see how the changes will affect you before the official release of 4.16.

In version 4.14, the HTML sanitizer was added to all widgets to sanitize and escape strings according to the ArcGIS Online supported HTML specification. For 4.15 we relaxed some of the sanitizing rules when displaying HTML to be less restrictive than the ArcGIS Online supported HTML specification. We also fixed a bug related to sanitized HTML content not displaying in PopupTemplate.content (see below).

The Print widget UI now displays different icons based on whether the printed map can be automatically downloaded or opened in a new window. See the fileName and title properties for more information. Developers can also define which formats and layouts to make available to the user in the UI. These properties can also be set via the PrintViewModel.

The Editor now has built-in functionality for editing attachments. If the associated feature layer supportsAttachment's, an option to add, update, or delete an attachment is provided. Nothing additional needs to be configured to allow attachment(s) editing, the Editor widget honors whatever permissions that are set on the underlying service.

There are two new Workflow classes: CreateWorkflow and UpdateWorkflow. These two classes are specific to either adding a new feature or editing an existing feature respectively. The functionality remains the same, it's just now separated into its respective class. In addition to these two classes, there is also new classes to handle the workflow data: CreateWorkflowData and UpdateWorkflowData. In addition, Workflow edits are now referenced in the Edits class.

Attachments in the Popup

Set amount of actions in menu

It is possible to set the maximum amount of actions to display within a popup via its maxInlineActions property.

The MapImageLayer and it's Sublayer classes were refactored and modernized. Visualization saw improvements with smart mapping for dynamic layers support, and fixing some layer visibility bugs. Several issues with the popup behavior were fixed, such as being able to display descriptions when using coded domain values.

Lastly, we added the ability to load the sublayer metadata by adding Sublayer.load(), as well as MapImageLayer.loadAll() to load all the sublayers. After loading a sublayer you get access to new properties and methods:

As well as the renderer and labelingInfo as configured on the service. More details about these updates will be available in an upcoming blog post.

Developers can now take advantage of client-side processing and rendering of tiled image services in 2D maps using the TileImageryLayer.

Developers can now take advantage of client-side querying and filtering for StreamLayer in 3D SceneView. The client-side effects is also supported on StreamLayerView in 2D.

The percentile-continuous and percentile-discrete types have been added to statisticType. The percentile statistic indicates the value above or below which a given percentage of values in a group of data falls.

The sign-in and OAuth popup confirmation dialog used to access secure services is no longer implemented as a Dijit in a Dojo dialog. This dialog is specific to secure services that do not utilize OAuth in ArcGIS. The UI has been redesigned to account for this change.