As of version 4.18, IE11 and Edge Legacy browsers are no longer supported.

We’ve released a beta build for ES modules to make it easier to integrate the API with third party frameworks and build tools. They are available for installation as a new NPM package @arcgis/core. Once installed, you can use native imports like this:

The benefits of this approach include:

Visit Introduction to tooling to learn how to use the new modules and learn whether you should migrate. We also provide sample apps that demonstrate the basic concepts.

Create elevation profile charts using the ElevationProfile widget, available in both MapView and SceneView. Interactively draw or select existing lines in your map or scene to compare heights for terrain but also 3D objects such as buildings. The chart is computed using the Ground's elevation and provides additional statistics along the line. 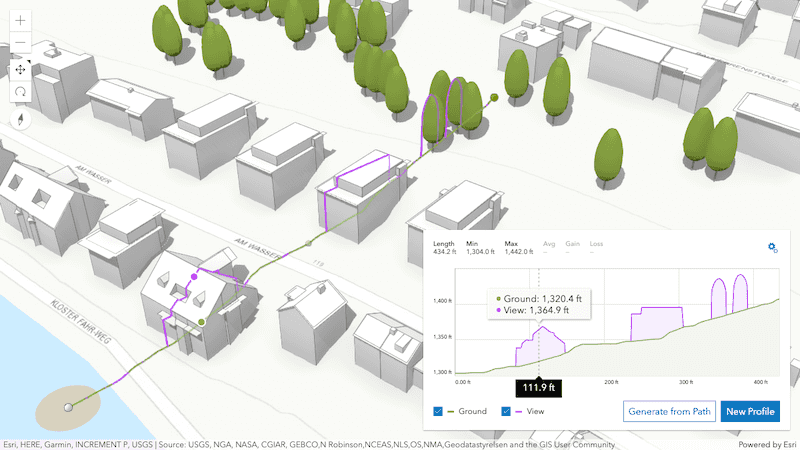 You can query features from clusters with the aggregateIds option on the Query object. This gives you the flexibility to do the following:

Display the visible extent of a cluster's features.

Calculate and display the convex hull for clustered features.

Display the features belonging to a cluster.

Interactive zooming, panning and rotating in underground scenes or viewpoints with large tilt has greatly improved. A new context-aware navigation takes visible objects into account to better predict an area of interest. You will notice a steadier navigation experience, especially when moving around or towards data visualizing subsurface pipelines and earthquakes for example, but also thin structures such as vegetation or power lines made up of point cloud data.

Update the attributes of a 3D object SceneLayer using existing Editor widget workflows or a new method applyEdits(). Edits are applied to the associated feature layer but taken into account and rendered by the API until the I3S cache is updated.

See how updates to a scene layer representing apartments are immediately reflected in a new attribute editing sample. 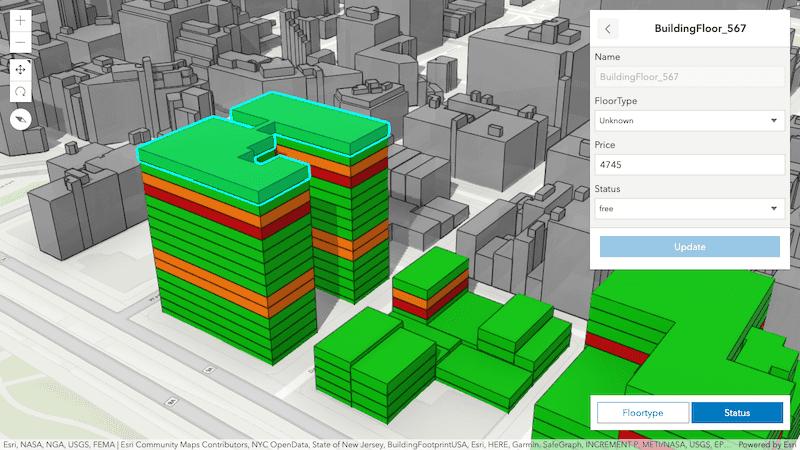 The latest release introduces beta support for self snapping when creating or updating line- and polygon features in 3D. Interactively create geometries that have parallel lines and right angles which are essential for features representing building footprints or line networks. You can enable self snapping through a new property SketchViewModel.snappingOptions and toggle it during a draw operation.

Try out snapping in the Sketch in 3D and Edit features in 3D samples. 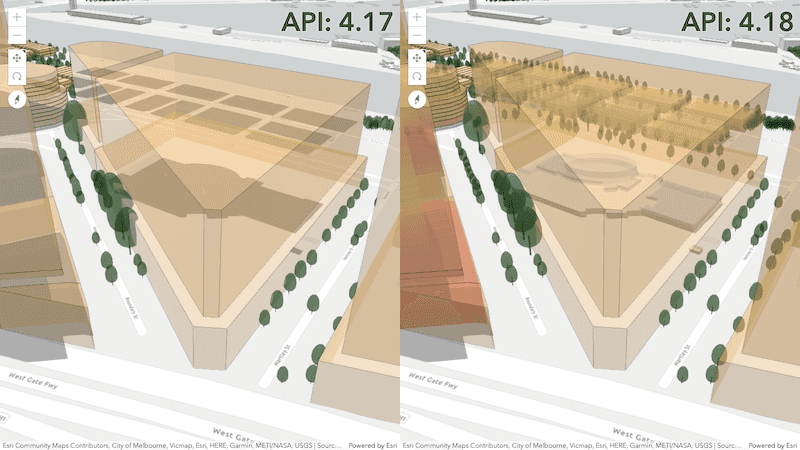 Skip the seven month journey to Mars by visiting our red neighbor with the ArcGIS Maps SDK for JavaScript. The latest release adds experimental support for Moon and Mars coordinate systems to SceneView. Visualize imagery- and elevation layers but also feature layers containing mapped information about the astronomical bodies. Atmosphere and globe diameter are automatically adjusted when loading a layer with a supported Mars or Moon coordinate system. 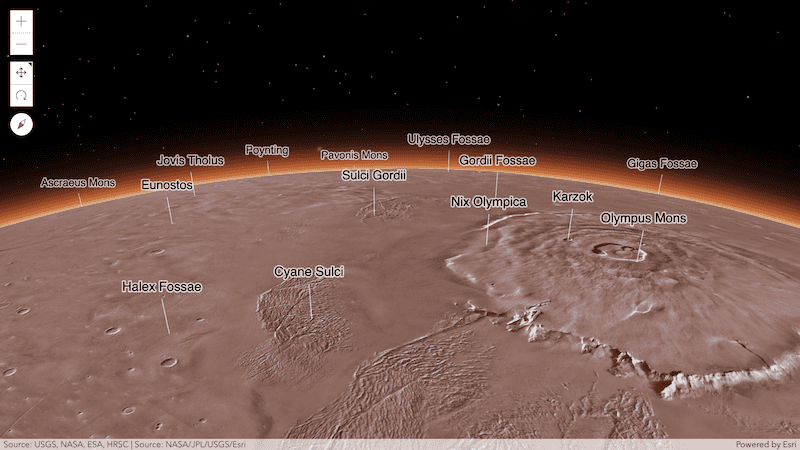 You can now apply Effects to all layers in 2D MapViews. This powerful capability allows you to apply css filter-like functions to layers to enhance the cartographic quality of your maps. This is done by applying the desired effect to the layer's effect property.

Since some effects like drop-shadow and blur are sensitive to scale, we enhanced the Effect API to make effects scale-dependent. You can set effects at different scales to fine tune the look and feel of the map. Check out the samples that take advantage of this powerful functionality.

In the following screenshot, we see the result of applying drop-shadow to features that intersect boundaries of London boroughs while applying blur and brightness effects to features do not meet from the filter criteria. 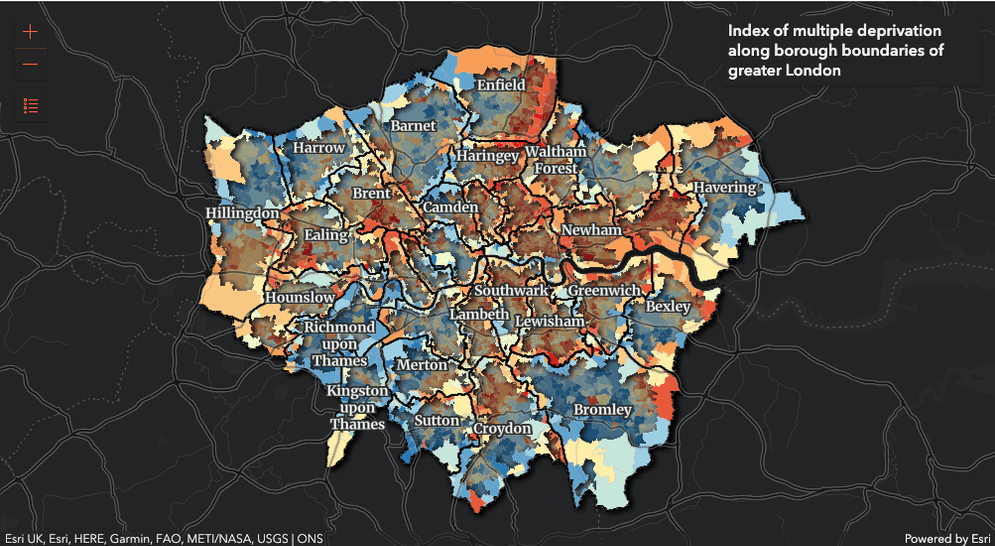 We continued our work from 4.17 to add default fade-in and out transitions to layer views for the following layers: MapImageLayer, WMSLayer, ImageryLayer, and BaseDynamicLayer. These transitions occur when a user toggles the layer's visibility is on/off, zooms in/out in the view, or changes the layer configuration. This is only supported in 2D MapViews.

We added helper methods that will simplify the process of updating a style loaded with a VectorTileLayer. With these methods, you will be able to add, remove or re-order style layers. You can also modify any of the properties of a style layer with one call, without reloading the layer. Check out the VectorTileLayer - update style layers sample to see this in action.

We added the updateInterval property to StreamLayer to control the rate features are updated in the layer. This can help improve app performance.

We added methods to ImageryLayer for computing statistics and histograms for a given extent. ImageryLayer now has support for identifying content.

The graphic selection symbols were enhanced in the Sketch widget for better visualization. The update event's toolEventInfo parameter now provides more information when the user selects or deselects graphics using Shift+Left-click. The defaultCreateOptions.mode property is now click instead of hybrid to better handle snapping.

The Sketch widget also automatically includes two new selection tools within visibleElements: rectangle-selection and lasso-selection. These elements can be removed as needed.

The FeatureForm widget's UI has been updated when showing grouped fields. If its groupDisplay property is not set to sequential, the grouped fields now display with the option to collapse. The following shows the difference in UI between 4.17 and 4.18.

A new property, returnGeometry was added to the PopupTemplate and indicates whether to include the feature's geometry for use by the template. This property should be set to true if you need to access the selected feature's geometry. The geometry should be accessed via the returned graphic from the popup's selectedFeatureWidget. This is needed since the geometry is not automatically queried and returned in the popup's selected feature.

The Print widget was enhanced to support reading custom print templates defined in a portal. To accomplish this we added a new class, CustomTemplate, which defines the custom layout template options used by the Print widget to generate the print page. We also added two new properties to the Print widget: includeDefaultTemplates and portal. If the portal property is defined, the end-user will see a new Select template button in the Print widget UI. 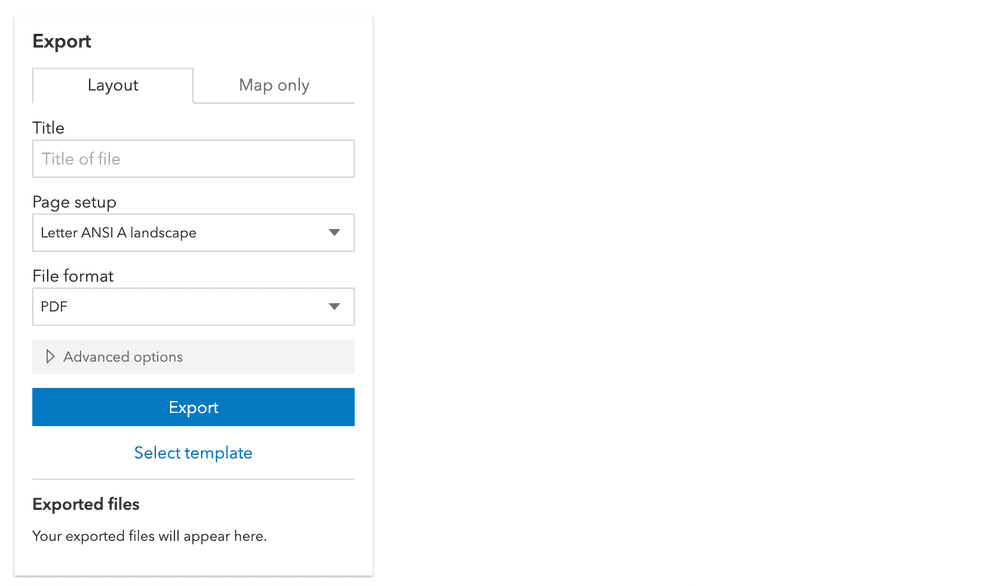 We enhanced the Search widget to work with standalone tables associated with a webmap. This allows users to search for specific records, based on a field value, within configured tables. We also added a findTableById() method that returns a table based on the given table ID.

We introduced a new app this release - the CIM Symbol Builder! This app provides an environment where you can design CIM symbols with a simple user interface, copy the JSON of the symbol, and use it in a web application built with the ArcGIS Maps SDK for JavaScript. 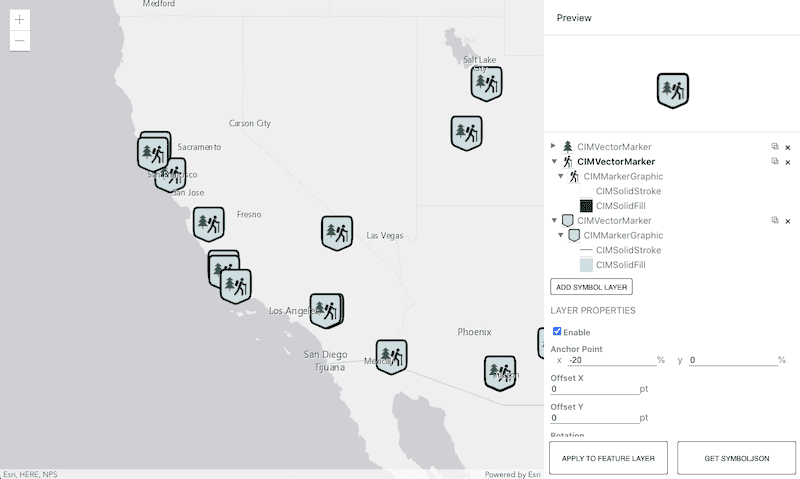 We introduced size themes to Smart Mapping size renderer creator functions. You can now create size visualizations with above, below, and above-and-below themes. These themes are well suited for data variables that show a change over time, such as change in population between two years. The above-and-below theme can help communicate how far above or below a data value is relative to a meaningful inflection point. 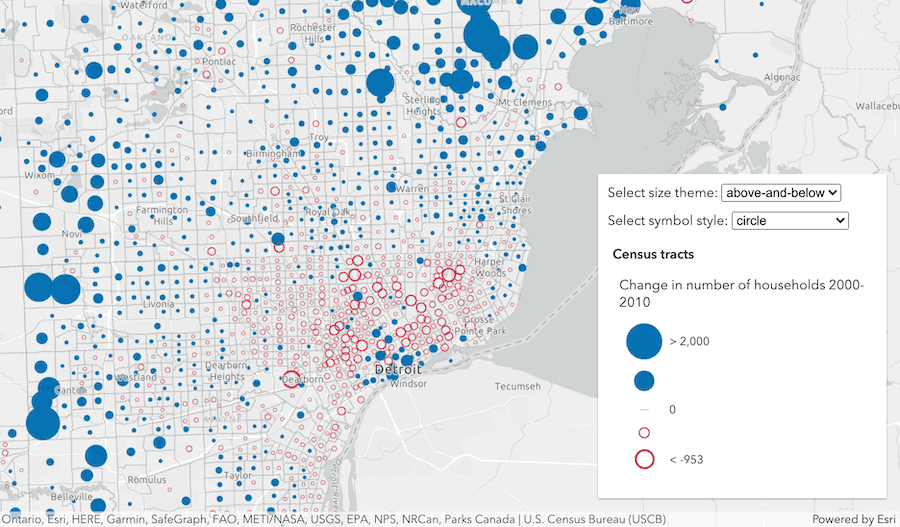 Iterate through a collection

You can iterate through the items of a Collection using for...of. Prior to 4.18, this was not possible. The following patterns are now supported.

Prior to 4.18, you had to do the following (these patterns are still supported).

Additional methods were added to the intl class to aid in creating, registering, and fetching message bundles used for widget strings. This can be helpful for developers needing control over how their custom widgets work with translation strings.

The IdentityManager modal dialog now captures and traps focus when shown. Prior to this version, no elements would display focused upon opening.

Support for Internet Explorer 11 and Edge Legacy for use with the ArcGIS Maps SDK for JavaScript was deprecated as of version 4.16. Version 4.17 was the last release with support for these browsers. This means that apps built with 4.18 (and beyond) will not function in IE11/Edge Legacy. See our updated System Requirements page and the Why is Esri ending support for Internet Explorer 11? blog to learn more.